Along the beaches in Martin and St. Lucie County there has been a good spring run for pompano the past week. Though up towards Fort Pierce has had the bigger fish, anglers working the beaches in Hobe Sound have been catching their limit. Pink shrimp- and crab-flavored Fishbites and sand fleas are working best. 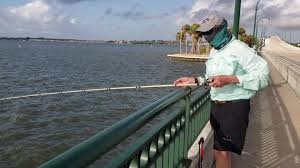 After being closed because of the amount of trash left behind, the relief bridges on the Jensen Beach Causeway have been reopened on a 90-day trial basis. As an incentive for anglers to do the right thing, the Snook Nook is offering two dozen live shrimp for every bucket of fishing-related garbage that is collected and brought to the shop.

Snook have been hitting live bait worked along the bridges and docks in the St. Lucie River.

There have been a few flounder reported being caught up by the power plant as well as at Indian River State Park. Shrimp on a jig head is working best.

Around the Boynton Inlet, over the sandbar, there have been small numbers of greenies and sardines as well as a light mullet run.

Anglers fishing live mullet off of the north jetty have been catching a few snook.

Fishing the inlet at night, permit up to 30 pounds are being caught using live crabs or whole squid during the outgoing tide.

Though not "on fire" yet, the bluegill and shellcracker bite has definitely started ramping up. Anglers using worms and crickets are having a blast catching the tasty panfish along the banks of the Kissimmee River as well as in the Buckhead Ridge area.

Though the spec bite did pick up over the past weekend with the cool front it has definitely backed off and that trend should continue.

Though the bass bite has been a bit slow, anglers are still getting their share using wacky-rigged senkos, flukes and, of course, live shiners. The bass are slowly making their way out of the grass, but not quite on the outside edge yet. Hot spots have been Eagle Bay and Tin House Cove.

Sunshine Bass have been hitting live shad on eighth-ounce jigs in the deeper parts of the lake. The peacock and largemouth bass bite has tapered off some, but they can still be caught tossing live bait or top water plugs around the docks in the early mornings.

Water temperatures in the reserve have stayed just shy of 80 degrees with clear to semi-clear water conditions. The post spawn bite remained strong. Fishing has been great on days of mostly cloudy skies with some noticeable breeze which brought out the two- to four-pound largemouth bass as well as the cichlids and a few bowfin. Recent clear-sky days, with no wind, has made fishing more difficult with the smaller bass hugging the weed line. The bass bite has been best on topwater lures and dark-colored senko-style worms fished with a lightweight Texas rig. Cichlids were easily caught using live worms.