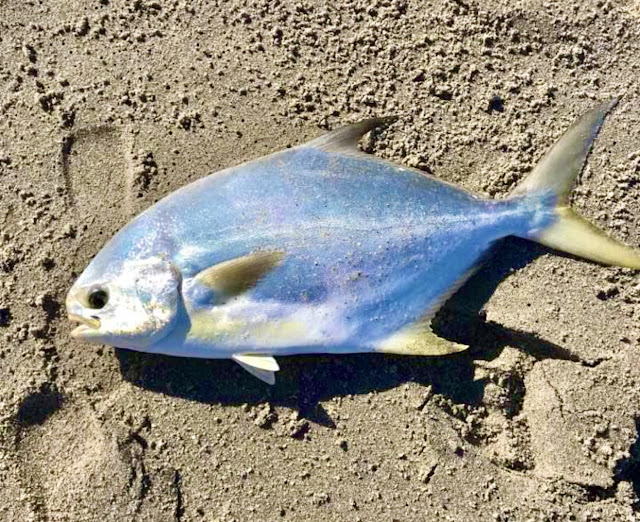 The pompano bite is still excellent from Hobe Sound up to Fort Pierce. Like last week the bigger fish are being found in the northern areas while there are anglers limiting out off the beaches around Hobe Sound. Pink shrimp- and crab-flavored Fishbites are working well as are sandfleas.

In the St. Lucie River the snook bite has been really good. Though there have been a lot of shorts, there are also bigger, slot-size fish being caught. Live bait including threadfin herring and croakers, which can be found at the Snook Nook, are working best.

Also, in the St. Lucie River the mangrove snapper bite has been good around the bridges and most structure as well as along the rocks at the St. Lucie Inlet.

The powerline poles and channel markers have been holding some nice black drum and sheepshead. Fiddler crabs, also available at Snook Nook, have been the best bait.

The fishing along the beaches in Jupiter has been fantastic the past week.

With the fish targeting the schools of glass minnows running along the beaches, lures that mimmick them are a good call. Yo-Zuri Crystal Minnow, Rapala X-Raps or rubber shad will work just make sure they're on the smaller size. Throwing a spoon is also a good option.

For the pompano try a Doc's goofy jig.

There have been a few snook, jack crevalle and pompano caught in the Loxahatchee River the past week, but there hasn't been much bait up there.

At the Jupiter Inlet, a couple slot-size snook have been caught.

Along the beaches around Lantana, both north and south, anglers are catching permit and lane snapper. They are being caught on shrimp and sandfleas. Also in the mix have been some nice-sized jack crevalle and a few monster tarpon up to 100 pounds. They are both hitting top water lures and two-ounce spoons in the mornings.

In the Intracoastal Waterway from the Boynton Inlet north to the Royal Palm Bridge, anglers using shrimp and cut sardines are catching snapper, small permit, Southern sennets, bluefish, sand perch and black drum. The key has been targeting the deep holes and rock piles.

The snook and tarpon action has been good at night around the bridges and lighted docks in the ICW for anglers using small glass minnows and shrimp flies on five- to 10-weight fly rods. They are also being caught on live shrimp, small sand perch and small Rapala minnow lures worked along the shadow lines.

Anglers at the Lantana Bridge have been catching sand perch and croaker on cut shrimp.

As the spec bite continues to dwindle, the bluegill and shellcracker bite keeps picking up. Crickets and worms are working best and anglers fishing the banks of the Kissimmee River are having a blast catching these tasty panfish.

The bass bite has come back up since last week. Live shiners are working best (better to feed than fool), but if you're going with an articial bait, Senko worms in dark colors, worked just inside the outside grassline, are your best bet. Though King's Bar has been a hot spot, mostly just look for the cleanest water right now.

Though the water temperatures dropped into the low 70’s in the past week after a few cool evenings, the bass bite remained hot in the reserve. As the week progressed, temperatures recovered to the mid- to high 70’s. Cooler windy and cloudy days produced strong top water and shallow water bites with dark Senko-style worms and even crank baits offering reliable results. The larger bass seemed to be much more active as the wind picked up. Sunny days resulted in more small bass and short strikes, but the fish were still hitting.

Though the cichlid bite can be annoying for the bass fisherman, some enjoy the sport using ultra light gear and very small lures. Cichlids are extremely plentiful right now, hit hard and fight nicely for their weight and size.

For those without access to a boat, the new fishing pier seems to be complete and there have been some impressive results already.

Want to know where the schools of glass minnows are? Look for the birds diving on them.