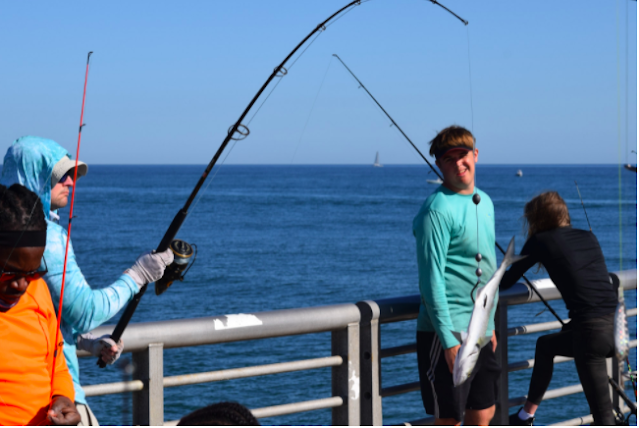 Welcome to a new year, marking the 103rd birthday for the Sebastian Inlet District. Our trusty fishing guide, “Snookman” Wayne Landry tells us that the year begins with fishing that can be described in two words: Slow.

“With the water warmed back up to 73 degrees from the 68 it was last month when the fishing was good for the ‘cooler water’ species, the water quality has diminished due to the green algae that give the water a green tint,” Wayne says. “Winds have created cloudy, turbid water, which the fish avoid. On a good note, the inlet is still full of the large black/roe mullet for the cast netters, and finger mullet are still around for bait. you just have to find them. “

Wayne says to look for bluefish, jacks and blue runners on the outgoing tides at the tip of the North jetty. Use spoons, jigs and cut bait. He has also seen large redfish caught in the channel with anglers using cut and live baits on the outgoing tide. The black drum and sheepshead bite has dropped off, with only a few being caught on the ocean side on cut clams and shrimp. Also, a couple of large redfish were caught here as well (on the high tide is best), he says. “Flounder fishing on this side has also dropped off, with most of the fish still small and being caught in the back of the inlet west of the catwalk.”

It’s a similar scene at the South jetty, where anglers are catching bluefish, jacks and blue runners on the outgoing tide at the tip, along with a few sand perch on cut shrimp. “Flounder fishing over here, too, has slowed quite a bit with most fish being on the small side. Fish the incoming tide along the wall and jetty, also the pocket area on the beach,” he says.

There isn’t much to report at the T-dock area, except for small bluefish and an occasional Spanish mackerel on small spoons and jigs. Also, small grunts and pinfish are being caught on cut baits around the dock pilings, Wayne says.

It’s slow along the surf area on both sides. Wayne says anglers were catching pompano on the south side before the south winds clouded the water and warmed it up as well. Small whiting, pesky catfish and stingrays are present, as well along with a few blues and jacks.

“Well, folks, it’s shaping up to be a nice and mild week, so grab your fishing poles and get out and enjoy the outdoors,” Wayne says. “Who knows? You may catch that ‘catch of a lifetime’ fish.”

And a reminder: “Keep the jetty safe for everyone — anglers and sightseers as well — please do your best to obey all park rules, especially on the jetty as it becomes crowded at times. If we all do our part, we will enjoy a safe and relaxing outing. Thanks everyone, and tight lines.”

Safety message for the new year: The freshly-painted yellow lines on the North jetty designate a safe walkway on the jetty. Only anglers and poles should be in the area between the line and the railing.  Place carts, coolers, chairs and fishing accessories only in the center of the jetty/yellow lines. The park service painted the lines to create a clear pathway in the case of a medical emergency. A stretcher will not roll on the grates.