We got to experience some really calm beach days during the month of December, however those are not the greatest conditions for Pompano fishing on the beaches. Pompano tend to feed more when there is a little bit of surf that will uncover the little crabs, shrimp and other bait that they feed on that is hiding underneath the sand. Also, as mentioned with the Pompano fishing inshore, the inconsistent temperatures have not allowed the water to stay steadily in the range where the schools really start moving into our area. There still have been Pompano hitting the beaches by those who are putting in the time. 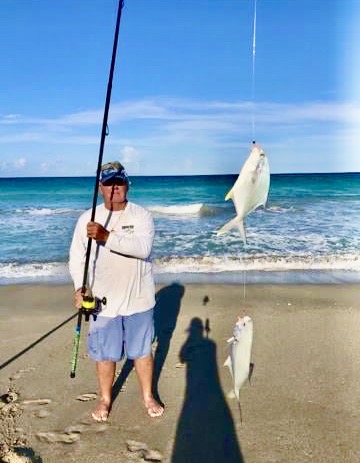 According to Capt. Paul Sperco, the best beaches to hit have been those south of Jensen Public Beach. For those fishing with FishBites, he says EZ Flea and Yellow Crab have been his most productive flavors lately. We should expect to see the Pompano fishing improve in the month of January.

Anglers have been able to find several other species on the beach other than Pompano. There have been some steady Whiting and Croaker reports by those fishing pieces of shrimp. There have also been Bluefish, Mackerel and Jacks cruising the beaches in the mornings and evenings. Fishing artificials like spoons will get the bite when they are around!

There are a number of different species you can target in January. Sheepshead, Black Drum, Croakers, Pompano, Triple Tail and Snook all make the catch list. Fishing the bridges, channel markers, docks, underwater mangroves or any type of structure is a great way to look for Sheepshead, Black Drum and Croakers. Live shrimp on a jig head is the most popular way to target those species. Fiddler Crabs are also an excellent choice for Sheepshead and Black Drum. If you are hunting for Triple Tail, channel markers and crab trap floats north of the Stuart Causeway up to north of the power plant are a great area to look for them.

It has been a slower year for those looking for Pompano inshore so far. We have heard about a lot of Bonefish caught as by-catch by those targeting Pompano. There have been some Pompano caught on the Sailfish Flats as well as by those jigging on the causeways. The weather was a bit inconsistent during the month of December with a cold day followed by a hot day followed by another cold day and so on, which has not allowed the water temperatures to stay at a consistent cool temperature that the Pompano are really looking for. Once we get some consistency and a few cold fronts to cool the water down, we should be greeted with some steady Pompano action inshore. However, by stocking and ordering Pompano jigs in the shop, it seems that Pink jigs with a chartreuse teaser have been the top seller.

For those targeting Snook, as a reminder, the season is closed and will reopen on February 1st. The majority of fish have moved up into the river and can be found in the St. Lucie river, and up around the power plant. Fishing shrimp presentations is a great way to target them this time of year as they tend to key into slower moving baits. Live shrimp or artificials such as DOA, Monster 3x and Vudu Shrimp are great choices to get the bite. It is still pretty tough for them to pass up a nice Pilchard or Croaker! Also, some quality sized Snook have been caught around the local causeways at night fishing Flair Hawks and slow rolling bigger swimbaits on the bottom.

Our nearshore fishing action this time of year is pretty tough to beat. The best part of it is that it is not too difficult either! Spanish Mackerel fishing at Pecks Lake is one of our most popular fisheries. Thousands of Mackerel have been schooled up just south of the inlet here lately and should remain there going into January. Popular lures to target them include; the Gulfstream Flash Minnow, tube lures, Gotcha Plugs and Spoons. Rig them with some wire or heavier mono leader and enjoy the action! It does not hurt to grab a 5lb box of Glass Minnows to chum them up behind the boat as well in case they are reluctant to bite. Throwing handfuls of Glass Minnows will typically fire them up and get them to bite.

An underrated fishery we have is our local patch reef fishing. We have patch reefs scattered up and down our beaches in 10-30ft of water that can provide some great action this time of year. You can fish pieces of shrimp or live shrimp on a jig head and load the cooler with Sheepshead, Lane Snappers and other species.