Will Be Missed But Never Forgotten 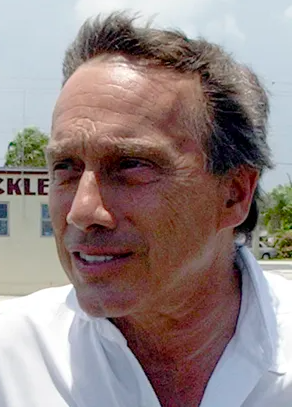 "It amazes me that our political fathers look at our waters like a stepchild. The hard part of it is knowing that everybody knows what the problem is, but nobody is going to do anything about it." ~ Henry Caimotto

Henry Caimotto moved to Jensen Beach in 1983, leaving behind the cold winters of Michigan for the warmth, sunshine and sparkling waters of the Treasure Coast. By 1984, he had become owner of Snook Nook Bait and Tackle, and few who knew him ever saw him wear long pants again.

Caimotto's loss was commemorated by scores on Facebook pages. Some knew him as a vocal, feisty champion for clean water. Others knew him as the guy who sold them a couple dozen hand-picked shrimp when they went fishing in the morning.

One thing about Caimotto was certain: Those who met him will never forget him.

"When I moved to Stuart in 1999, I was assigned to write environmental stories for Florida Sportsman magazine," said Indian RiverKeeper Mike Conner. "I was sent to Rivers Coalition meetings, where Henry Caimotto basically was the engine that pulled the train.

"He set the bar for activism, and those office-holders who lacked Henry's fire for the River hated to see him coming. He stoked a little fear, and that was what I admired about him most."

Caimotto had a favorite saying about why Florida is a very special place.

"If it were not for the water and the sunshine, everybody would go to Arizona. Because if you just want sunshine, what a great place to find it. At the rate they're treating our water, it may not be long that we may all be going to Arizona," he told TCPalm's Tyler Treadway and Eve Samples in 2013.

Caimotto had been a hairdresser during his days in Michigan. But he found his calling as a small business owner who understood the Treasure Coast's inextricable link between its waterways and its economy. He was passionate about making sure the powers that be learned how their decisions — influenced by special interests — could kill off an entire segment of a community's economy.

In the late 1990s and early 2000s, Caimotto hosted a weekly fishing show on a cable access channel that aired Saturday evenings in Martin and St. Lucie counties. He spent the first 15-20 minutes of the two-hour program reading headlines from local newspapers about how polluted the St. Lucie River, Indian River Lagoon and Lake Okeechobee were.

Caimotto also could be heard delivering a daily fishing report on WSTU 1450 AM and hosted a weekly radio show Friday afternoons on the same station.

His commentary on how waterways were being managed by the Army Corps of Engineers, South Florida Water Management District and other state and county officials often was scathing. In spring 1998, a massive Lake Okeechobee discharge event really drew Caimotto's ire. That's when scores of species of fish in Martin County waters began showing open, bleeding lesions on their heads, fins and skins.

Caimotto allowed the Department of Environmental Protection to stage a sick fish collection station in his shop's parking lot. Former TCPalm reporter Tyler Treadway described the 1998 moment in a 2016 analysis of a discharge event that year.

"While the DEP was collecting fish at the Snook Nook, the shop's owner, Henry Caimotto, was collecting more than 30,000 signatures from local residents pleading for a solution," Treadway wrote.

"The discharges fired up a lot of people," Caimotto told Treadway. "It got some play in the media. Some meetings were held, and then some more meetings. People said they'd study this and that. I heard the word 'study' so much it chokes me. But in the end, nothing ever happened."

Caimotto blamed Big Sugar and was frustrated with elected officials who didn't do anything about the problem.

“We have to buy the land south of the lake. There are areas where we can buy the land and treat the water," he said in a 2018 interview in Indian River Magazine. "Agriculture could care less because it is not to their financial advantage. The money is too big on their side. I blame the politicians. They know where they get their money from."

Today, Everglades restoration projects have begun to reach completion, people with knowledge of the river are in positions of power and the Army Corps works closely with Treasure Coast officials. Caimotto's passion helped in achieving that.

Caimotto also will be remembered as someone who was always willing to help. He gave fishing instruction for free to anyone who asked. He donated products from his store for charity auctions and fishing tournaments. He educated people who simply stopped in to buy shrimp how to become better stewards of their environment.