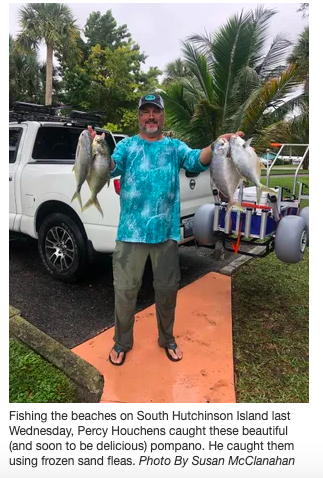 With the water temperatures down some in the St. Lucie River, the pompano bite has come up just a bit. Anglers are catching a few more than last week on the Sailfish Flats and that bite is expected to continue picking up.

The sheepshead bite has been solid along the St. Lucie River around most structure including bridges and docks and has been best using shrimp on a jighead.

Black drum are being caught with some consistency at the Roosevelt and 10-cent bridges using live shrimp and crabs.

Snook season opened on Tuesday and they are being found in multiple areas including up around the power plant, at the causeways and up deeper into the St. Lucie River. Flarehawk jigs and artificial shrimp are working well as are live pilchards and croakers.

Along the beaches in Martin and St. Lucie County, more pompano have shown up recently. They are being caught 70 to 100 yards off the beach so bring the big rods.

Anglers targeting pompano are catching some nice whiting as bycatch.

With the extremely cold weather and rough seas over the past four or five days, Capt. Bruce said they had not been heading out on the ocean.

He said it was even too rough and cold for the 2nd Annual American Academy Youth Fishing Tournament to head offshore last Saturday.

Instead, he took the kids trolling and drift fishing in the Intracoastal Waterway from Boynton Beach up to Lake Worth Beach.

Trolling with planers and spoons and then drifting high/low rigs with shrimp and squid, the kids caught jack crevalle, croakers, sailcats and even one huge rabbit fish.

In addition to the thrill of going fishing, the children got to hang out with UFC superstar Rashad Evans.

Coming out of retirement, Evans had fought the night before and defeated Gabriel Checco.

The mixed martial artist and Boca Raton resident is a board member at American Academy.

Capt. Larry Wright said the fishing has been really tough with the cold weather the past few days and that he'd had several charters cancel. He also mentioned that he advised a few clients against going out because it just wouldn't be worth it.

He did say the water, which in certain areas dropped into the 50s, would warm up quickly and that the fishing would quickly bounce back.

He said he had charters lined up for the rest of the week.

He said the spec bite, which was also slowed by the cold, had already bounced back on Tuesday. Guys working around the reeds and bullrush, in water around five feet deep with minnows, were doing well and that the anglers using jigs were doing better in the shallower areas.