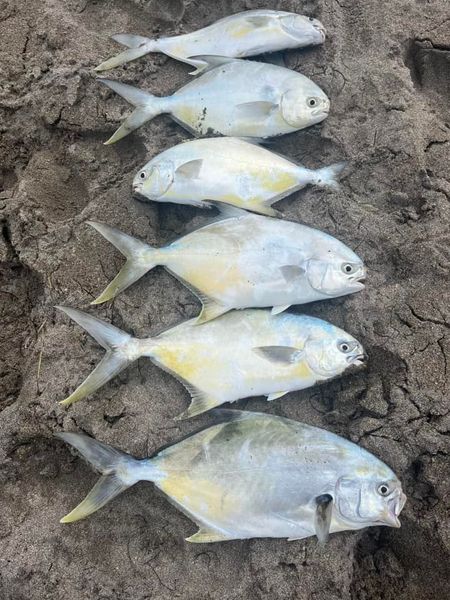 The pompano bite continues along the Sailfish Flats. Though still not going crazy numbers wise, but they are being caught. Pompano jigs, especially in pink with a chartreuse teaser, are working best.

Along the channel markers up around the power plant the triple tail bite has been solid.

There has been some redfish action at the Stuart Causeway the past few days with one 38-inch monster and several overslots reported. They are being caught on live shrimp and croakers during the incoming tides.

At the Jensen Causeway, snook are being taken using live shrimp on a jig head and on smaller artificial shrimp.

Along the Martin and St. Lucie County beaches, pompano are still being found in the deeper troughs approximately 70 to 100 yards from shore. Electric Chicken Crab Fishbites and EZ Flea Fishbites are working well.

As bycatch, anglers are also catching some nice whiting in the first trough as well as bluefish, Spanish mackerel and jack crevalle that are moving through.

The bluefish, Spanish mackerel and jacks are also hitting spoons.

In the Intracoastal Waterway from Jupiter down to Singer Island there has been a nice uptick in the sheepshead bite. They are being caught mostly on sand fleas.

Cut bait including mullet, threadfin herring and squid has produced a good bite for mangrove, mutton and even a few mahogany snapper at Phil Foster Park the past week.

After the cool weather and dropping water temps put a hurting on both the bass and spec bite last week, things have rebounded some.

Using live shiners and working the outside edge, the bass bite has picked up, especially around the Little Grassy area. Though live baits are definitely working better, if you're going to use an artificial, dark colored Senkos are getting hits.

The spec bite has also bounced back some. Though guys are not quite getting their daily limits, they're getting close. The Indian Prairie area using jigs in the reeds has been producing good action.

Need a bass fishing fix and don't have time to make it out to Okeechobee? Anglers working the deeper holes on Lake Osbourne are reporting catching sunshine bass up to five pounds. They are using three eighth-ounce white jigheads in combination with live shad or minnows.