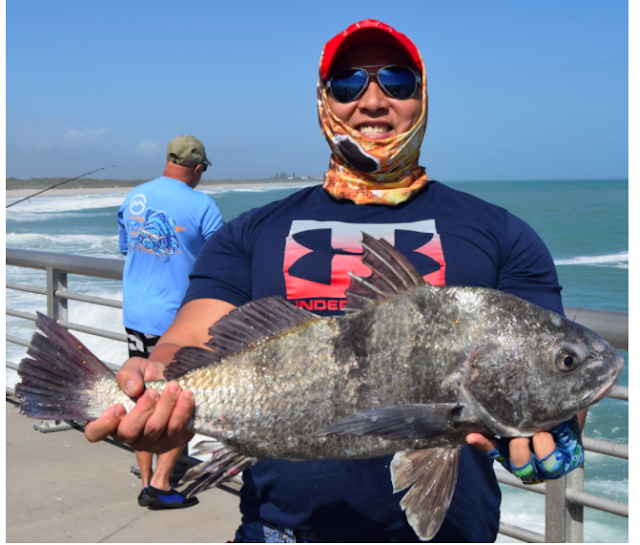 Our fishing guide, “Snookman” Wayne Landry, reports that the weather has calmed and warmed up to 67 to 68 degrees since last week and is cleaning up well. Fishing was rather good over the weekend, he says.

At the North jetty, the bite has mostly been all on the outgoing tide at the tip of the jetty with small bluefish and Spanish mackerel being caught on small jigs and spoons, Wayne says.

“Also, nice black drum and sheepshead have shown themselves again, most being caught on dead shrimp, live shrimp and live clams,” Wayne says. “Many of the drum are between 15 and 25 inches and some being caught are around 20 to 40 pounds. On Saturday we had a huge school of the black drum swimming down the beach, and several were caught in the 30 to 40-pound range. The sheepshead being caught, also on cut shrimp and fiddler crabs, have been around 14 to 15 inches - nice fish for the table.”

Anglers are catching bull reds on flare jigs and live baits of any sort, all on the outgoing tide, also at the tip of the jetty, he says. With the water warming up and the presence of thread fin herring that arriving this time of the year, the snook bite has picked up, with the fish being caught also at the jetty tip.

“The snook are being caught on the live thread fins one day, and live pigfish the next day,” he adds. “You never know what they want to eat, so be sure to bring a couple of different baits to tease them with. Most of the snook are over slot and must be returned to the water unharmed as soon as possible. I did see several slot fish taken. The tip of the jetty has been the ‘hot spot’ and it gets crowded, so have patience and respect for other anglers when you go. The incoming tide has been slow as the waves washing over the jetty has kept the inside  silted up and rough. Sheepshead are being caught with cut shrimp between the pilings. Also, mackerel and bluefish are present on the incoming tide as well.”

Fishing at the South jetty has been mostly bluefish and Spanish mackerel at the tip on outgoing tide with small jigs and spoons, Wayne says.

“Those fishing with cut shrimp are finding sand perch, black margates, whiting and the pesky catfish, too,” he says. “In the beach pocket area, flounder have returned and are being caught on small finger mullet and mud minnows. There are some small flounder on the incoming tide along the rock wall here as well, same bait, and snook and redfish being caught on live thread fins and pigfish too.”

Fishing is slow at the T-dock area, but anglers are catching Spanish mackerel and bluefish on small jigs and spoons. “I heard that that sheepshead are being caught around the dock pilings and the rock wall by the little lagoon that is back there,” he adds.

If the water cleans up at the surf on both sides, look for a continuation of the pompano bite, as the water temperature is getting to the zone that they like. Cut shrimp and sand fleas will do the trick. And beware, the catfish and stingrays will lurking due to the silted, cool water. Those fishing small jigs and silver spoons should also attract blues and mackerel.