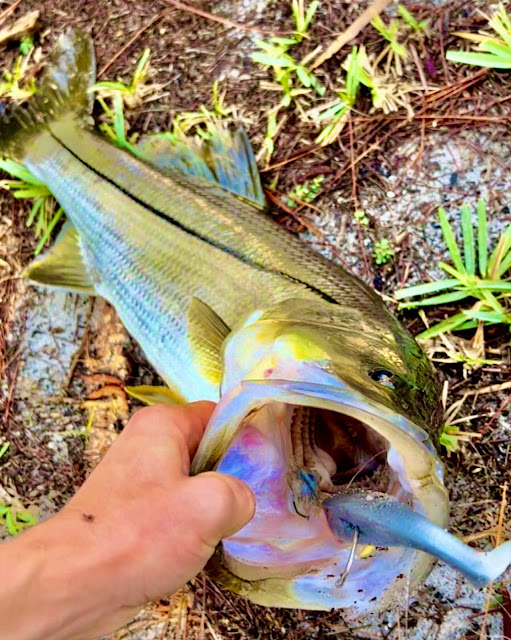 The snook bite continues to get better in the St. Lucie River.

A lot are beginning to make their way toward the inlet and are staging around the docks and bridges. Live baits, including pilchards and especially croakers (which are in stock at the Snook Nook), are working best. Anglers working the bridges at night, however, are having good luck working artificial shrimp and swimbaits along the shadow lines.

The flounder bite is still good at the Stuart and Jensen Causeways as well as on the Sailfish Flats. Anglers are finding success using shrimp on a jig head or small mullet or pilchards.

Anglers at the Lantana Bridge have been catching croaker and sand perch on peeled shrimp.

For past reports and other fishing related information click here

On Tuesday at 9 a.m., Capt. Larry Wright had his clients into 26 largemouth bass. They were using live shiners and working the outside grassline in the Indian Prairie area. Though Capt. Larry said there were no giants in the mix, they did have several five- and six-pounders.

Though the spec bite continues to wane, they are still being caught in the Kissimmee River at night on grass shrimp.

The bluegill bite in the Harney Pond and Indian Prairie canals has started to pick up and they are being caught on crickets.

If you've got the time and don't mind a relatively short drive, the canals along Alligator Alley are firing right now.

Capt. Pat Smith said at almost any exit, it's easy to get 150 fish in a day including oscars, peacock bass and more.

For the oscars, which in that area can get up to nearly two pounds, three or four weight fly rods are a blast.