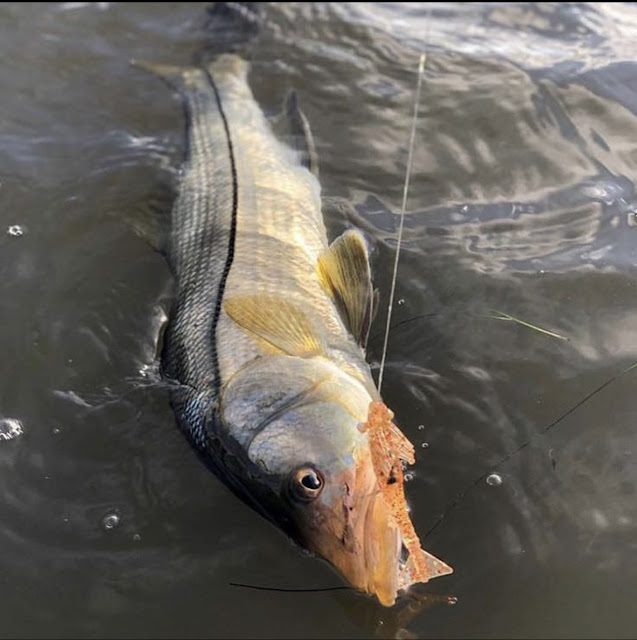 The Snook bite is definitely starting to heat up for us here. For those fishing from boats; docks in the St. Lucie River have been quite productive fishing live baits such as Croakers and Pilchards. A lot of slot sized fish have been in the mix along with some nice over slots. Snook have also been caught at the Stuart Causeway, 10 cent bridge and Roosevelt Bridge. Have heard about a lot of Snook hanging out around sea walls in the mornings as well, it will be tough for them to pass up on a nice mullet for breakfast. We haven’t heard too much about Snook being found around the St. Lucie Inlet quite yet. For our land based anglers, the Snook fishing at Jensen Causeway has remained to be quite consistent. A lot of anglers are going in the evening/night and fishing with artificial shrimp such as Monster 3X or Thumper Shrimp and some anglers have been throwing swimbaits such as NLBNs and finding fish. Live shrimp and croakers have been producing some fish there as well. Outgoing tides in the evening have been the most productive there with some small crabs and shrimp flowing through with Snook feeding on them. We should have a steady Croaker supply going forward throughout the summer, if you haven’t tried them out yet, you’re missing out!

The Sailfish Flats have been showing some life here recently. Anglers jigging the flats have been finding some Pompano, Bonefish and a variety of species. Anglers have still been picking at Sheepshead in the inlet as well with shrimp on a jighead. Around the causeways, other than Snook there have been some Mangrove Snappers, a few Black Drum, Sheepshead and more species that have been willing to eat a shrimp on a jig. For those looking to run to the north, there have been some Croakers, Sheepshead, Flounder and Triple Tail on the channel markers. If you are looking to do some flats fishing around the power plant, there has been some Trout action in the morning around Bear Point and Middle Cove. Top water plugs, artificial shrimp, shrimp on a popping cork or a jig should get you a bite. There have also been some Flounder and Snook caught in that area.

For those looking for Tarpon, there have been some in the 40-60lb class towards the power plant. Fishing live pilchards, mullet or DOA Terror Eyz should give you a good chance if you can get into them. There have also been some juvenile Tarpon up in the North Fork, the same baits will do the trick there. As we get into the Spring, more bait should be showing up inshore which should be followed by Tarpon. Be on the lookout for them in the Crossroads, the St. Lucie Inlet and around the causeways on outgoing tides.

Mid to late March provided some solid Pompano action on Martin and St. Lucie County beaches for anglers. Our spring run historically has brought along with it some of the best Pompano fishing of the year. A lot of these Pompano are quality sized fish as well. We should expect to see more Pompano caught during the month of April when conditions permit. The fish have been spread out from Middle Cove to Hobe Sound. If you can find a beach without slime weed, there is a good chance you will find some fish. The majority of these fish have been caught 60-90yds off the beach in the deeper troughs. On windier days, a lot of anglers have hit up Hobe Sound Beach to fish, the reef is able to knock down the waves a bit making the conditions a bit more fishable. Electric Chicken Crab FishBites has proven to be the bait of choice for those targeting them. The Electric Chicken Crab has been so productive that Capt. Paul Sperco has been tying special edition electric chicken Pompano rigs. Capt. Paul is in the shop on Thursday mornings and drops off some of his rigs when he comes in. They go fast, so if you are looking for them, it is best to get here as early as you can on Thursday mornings. We have a solid stock of the electric chicken FishBites, if you haven’t used them, I would definitely give them a shot. EZ Flea and Yellow Crab flavored FishBites have produced fish as well. You can always add some frozen bait to your rig when fishing with FishBites as well, pieces of shrimp, clam or sand fleas will be the best options if you are looking to fish with bait. Sand fleas have been extremely tough to get this year, both on our local beaches and from our distributors. We have been able to get some here in the shop, but we are limiting three bags per customer at the moment due to their availability.

As we get into the spring, whiting and croaker fishing should improve on a weekly basis. A lot of these fish will be caught in the first trough on pieces of shrimp tipped with pink shrimp FishBites. Anglers targeting Pompano have also caught some nice Whiting and Croakers as bycatch in the deeper troughs.

There have been a lot of signs of life on the beach, more bait has been showing up which has been followed by Bluefish, Spanish Mackerel, Jacks and a variety of species. Look for the birds and throw spoons for some light tackle action.