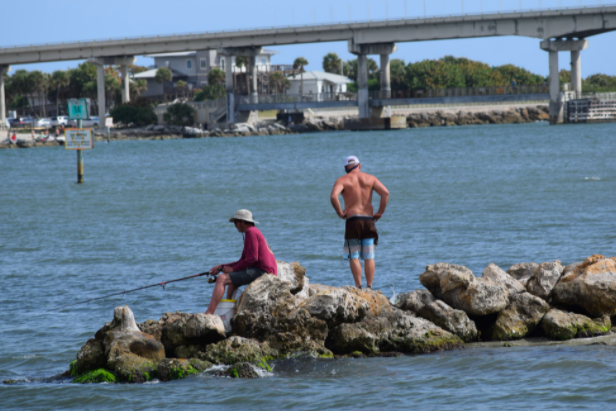 Decent snook bite at North jetty; reds and blues at the South jetty

“Well, my fishing folks, the weather last week and this past weekend played a big part on the fishing at the inlet, as always. When it wasn't blowing and the water was clean, there were fish biting; when it was blowing and the water dirtied up, it all shut down pretty much, but I did see  fish caught during the blow as the dirty water was still warmed up to the 74 degrees it has been for the past week.”

“North jetty: At the beginning of last week there was a fairly good bite on the snook. Quite a few fish were being caught on the tip on the outgoing tide with live mojarras and pilchards. As always, most fish were too big to keep, but several slots were caught in the bite. Also, there were large redfish in the mix, with those all being too big as well, same tide and same baits. Another species I saw caught were large bluefish in the three-to-five-pound range on cut baits and large silver spoons (on the outgoing tide casting to the channel area). Sheepshead, though small, are still being caught around the jetty pilings on both tides on live fiddler crabs. Most have been too small to keep, but there are keepers in the mix. Also, I saw nice flounder caught over on this side. Live shrimp did the trick on them on the incoming tide, both sides of the jetty. Schools of the ‘springtime’ mullet are showing up around the jetties, not many yet, but enough to get the fish active when they are around.”

“South jetty: It has been a mixed bag of species being caught, depending on which tide you were fishing. Outgoing at the tip has been black margates, sand perch, sea bream, sheepshead and catfish. Incoming has been small snook and redfish. Some snook are big enough to keep and some redfish are small enough to keep. Also, there has been a pretty god showing of flounder over here when the water is clean and calm. I have seen quite a few nice fish in the 15 to 18-inch range caught on live shrimp and small grubs, fished slowly on the sandy bottom. Most  the flounder are ‘just’ short of being keepers, but fun, nonetheless. Bluefish and large jack crevalles are roaming in and out of the inlet for those throwing large silver spoons to the channel area on both tides.”

“T-Dock area: Back here the fishing is still slow, but you can catch snook when the conditions are right - clean and slow-moving water. Use mojarras them. Bluefish and jacks are also possible if you’re throwing spoons and jigs to the channel area.”

“Surf area, both sides: Depending on the winds and water clarity, I saw some nice whiting, croakers and pompano being caught just outside the break line in the waves. Small pieces of fresh shrimp and sandfleas are the best baits for these species. Also, it’s still possible to catch black drum. They are still migrating up and down the beach line. Blues and Spanish mackerel can also be found running the surf in search of small baitfish. Silver spoons and small jigs fished in the surf will attract them if they are present. Snook are also a possibility when the water is clean and calmed down, when croakers and mullet are present.”

“The weather is supposed to be kind of ‘uncertain’ all week, with gusty winds and some more rain headed through the area, so if you do get out to fish or beach it, check your weather so you don't get caught in it.

“Just a side note for anyone thinking about fishing for sharks from shore, or any dock, pier, jetty, or bridge: Sharks are a protected species. Please be mindful of these magnificent creatures and know the regulations before you go -  https://myfwc.com/fishing/saltwater/recreational/sharks/