The snook fishing in the St. Lucie River is still fantastic with plenty of slot and overslots being caught.

Working the sea walls, especially with live croakers, has been working extremely well. Thought the snook seem partial to croakers they were also hitting pilchards. In the early mornings a top water lure will get some hits.

If you're looking for a fight, those same sea walls have had some big schools of jack crevalle cruising them.

Up near the power plant the waders are reporting a decent sea trout bite again. Shrimp on a jig or popping cork will work as will artificial shrimp.

There have been a few big redfish up to 36 inches caught in the area. Sworn to secrecy concerning the exact location, one shop worker would only say "somewhere in the Indian River."

Along the beaches in Jupiter, when it's not too windy or a massive north swell isn't pounding the shore, there has been good fishing. 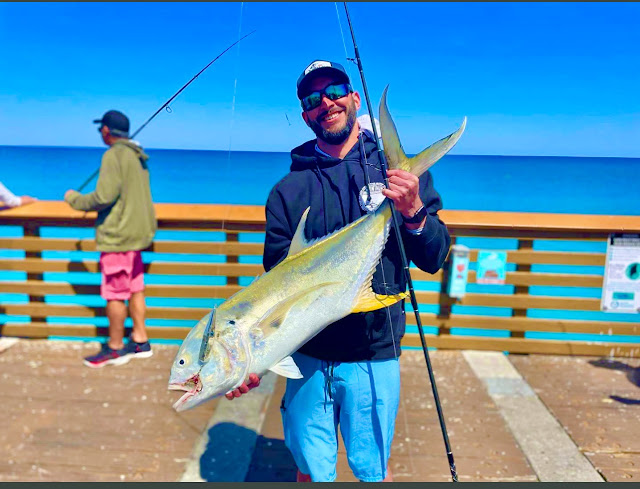 If you need a workout, there have been large schools of jack crevalle cruising the beaches as well as some tarpon.

As summer approaches and the water continues to warm, more and more snook are making their way out of the inlet and have been cruising the beaches as well.

At the Boynton Inlet, anglers have been catching both snook and permit off of the north jetty this past week.

Live croaker or pinfish, fished on the bottom during the last two hours of incoming tide and the first three hours of outgoing, has been good for snook.

Permit are mostly being caught during the first few hours of the outgoing tide at night using either whole or half crabs.

Fishing without clients and doing a bit of scouting for clear water out on the lake on Tuesday, Capt. Larry Wright said the fishing was a little tough.

Working solely with artificial baits, he said they did get into a few fish including one five pounder. He said that Poppin' frogs and Skinny Dippers worked over the thick stuff seemed to providing the best results.

The Horse Island area as well as the canal at Buckhead Ridge and the Indian Prairie Canal have been excellent for bluegill the past few days.

The shellcracker bite should turn on as Monday's full moon approaches. Three days before and after should be best using live worms.

There is still a spec bite hanging on for anglers working the waters under the Kissimmee River bridge and using grass shrimp.