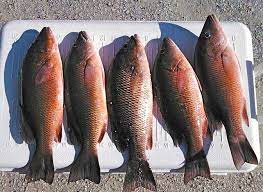 “Good morning fishing fanatics, and happy Monday to all! The last two days of snook season last week were good. I saw many slot snook taken, especially on the south side on the late incoming tide on mojarras. The nighttime bite was rather good on flair jigs and large grubs. Snook season is closed until September the 1, so you have to release any you do catch. Please don't target snook, as they  spawn in the summer.

North jetty:  Before the weather conditions deteriorated, fishing here was fairly good early last week, with some nice keeper snook being caught on live shrimp and mojarras on the early incoming tide. I saw several nice fish taken home. I also saw quite a few mangrove snapper caught. They arrived early this year, as last year they didn't start biting well until July. The fish I saw caught were averaging 11 or so inches and have been caught on cut bait. The fish were bigger than last year at this time, which were mostly under the minimum 10 inches. Maybe this year, the fishing for them will be better. Also, I saw some nice sheepshead caught around the pilings on cut shrimp. Atlantic spadefish also have been schooling up around the pilings on the incoming tide, and they will bite cut shrimp too. Big jack crevalles are still roaming around and chasing small schools of mullet in the inlet. They can be caught on large silver spoons and top water plugs, and of course, live baits.

South jetty: Like the North jetty, fishing was going off with lots of keeper snook being caught on the late evening incoming tides on live mojarras, jigs and grubs before the bad weather rolled in. On the outgoing tide at the tip, they were catching black margates, sea bream, blue runners and jack crevalles on cut baits. Also, at the beginning of the week pompano were being caught on the beach side on small ‘goofy jigs.’

T-Dock area: Fishing has slowed a bit, due to turbid water and seaweed. Small mangrove snapper are possible and those pesky ‘puffers’ are always around.

Surf area, both sides: Surf fishing has been hit-or-miss due to winds. While it was calm and clean, anglers were catching whiting, croakers, and a few pompano in the surf. Cut bait, sand fleas and fish bites were attracting them. Also, snook are present this time of year as they patrol up and down the beaches. They can be caught on small jigs, plugs, live croakers and mullet, but must be released unharmed as the season for them is closed.