INSHORE-  Snook fishing popped off pretty good this week.  The finger mullet started to show up inshore in fair numbers, and the snook (along with tarpon, jacks, and ladyfish for that matter) are tagging along with them.  Look for the best action to be at night as the mullet move more comfortably under the cover of darkness.  Moving water (incoming or outgoing) is key, and it's kind of a guessing game on where when the mullet will come through.  Topwater plugs (like a Yo-Zuri Topknock), swimmning plugs (Rapala X-Rap), or swimbait (3 and 5" NLBN) are all great lure choices for the snook.  Fish the baits with the current, and focus on ambush spots and current breaks.  If you find yourself fishing in the middle of big mullet schools; focus on fishing the outside edges or underneath the school.  At that point it's all about making the bait look different (IE a injured baitfish on the edge of the school). 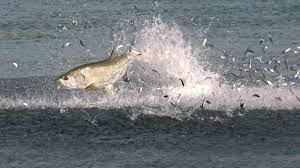 SURF/PIER-  Swells at the first part of the week somewhat limited surf reports; but it's looking pretty good coming into the weekend!  Plus...the mullet run is basically here!  Reports of big (we are talking BIG schools) mullet schools were coming in from Jensen Beach this week with tarpon and big snook in them.  Everything looks right for them to be in our area (or at very least only a short drive north) over the weekend.  Expect the tarpon, snook, jacks, big ladyfish, and a whole bunch of others around the mullet schools.  No bluefish reports yet, but they will likely not be far behind now as well, same with the sharks.  A handful of pompano reports as well coming in.  It's a bit on the early side for the pomps, but not by much.  It may still feel like summer outside...but we are no doubt on our way to fall fishing!
Posted by Tony Rose