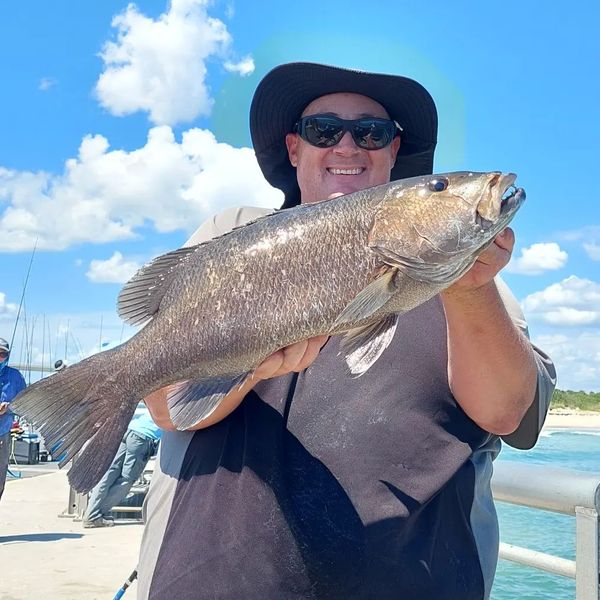 The Cubera snapper bite is on at the North jetty

This week’s fishing report by “Snookman” Wayne Landry: “Good morning,  Sebastian Inlet fans. Fishing at the inlet for the past week and the weekend has returned to a normal state for this time of the year. The snook bonanza we had the first five days of the opening season has gone away, and they are back to being tough to catch. I figured this would happen; it always does. If you are in the right place with the right bait at the right time, you might catch one. The bait scenario at the inlet has changed as it always does this time of year. The greenies and pilchards have mostly left and been replaced by mullet, which have started coming down the beach — a mix of fingerlings and bigger mullet. Also, pigfish and pinfish are starting to come out of the inlet, along with river shrimp for them to feed on. The mojarras have also pretty much gone as well, they are a spring/summer bait. And without further ado, here is your report.

North jetty:. The hot topic here has been the cubera snappers which have been putting on a good bite on cut baits and live mullet. Most fish are caught at the tip on the outgoing tide. Fish up to 33 inches are being caught, with the average being 28 to 30 inches. The mangrove snapper are still biting as well on cut baits and small greenies if you can get some, as they are not as plentiful as they were. Most fish caught are between 11 and 16 inches. They, too, are caught at the tip on the outgoing tide fished right in the rocks, also all along the jetty pilings on the incoming tide, same baits. There have also been many jack crevalles caught on the outgoing tide at the tip for those tossing spoons, jigs, live baits and cut baits. These fish have moved in due to the rough conditions from the offshore storm swell and the presence of the mullet. Snook fishing is back to normal but you must work for one. Most are caught at night now, and during the late evening tide. Also, early in the morning is producing fish, too. The night anglers are getting them on flair jigs, and the new hot bait: the NLBN swim baits. On the ocean side of the jetty, during the swell and high tide with the mullet coming down the beach, look for snook on the beach side in the pocket area when the water is rough. They like to ambush the mullet in the pocket area and along the beach. I saw three to four  keeper snook caught Saturday in that area. Fish live mullet and your favorite swim baits for a hook-up. Also, while I was down a couple of days last week, I saw two large schools of monster redfish about 100 to 150 yards off the north tip. Both times they surfaced, milled around, then went back down and vanished. Nobody hooked any. The school measured about 30 yards across, with possibly 2000 fish or more.

South jetty: The fishing has remained good, with the snook being the topic on the incoming tides all along the rock shoreline. Most of the fish here are smaller, which are a blast to catch, but there have been plenty of keepers. The best baits have been live pins and pigs, and large live shrimp, if you can get some. Also, smaller redfish are being caught as well, but remember, they are now catch-and-release only. On the outgoing tide at the tip there are a lot of jack crevalle, blue runners and catfish being caught, as the water is much dirtier than the north side. A few snook are being caught on live baits in the eddy at the southeast section and the beach pocket. The late evening incoming tide is producing snook for the jig and swim bait guys.

Catwalks, both sides: Fishing has been slow, with the small baitfish going away.  Small mangrove snapper are still being caught, along with some black margates and jack crevalles on cut baits fished around the pilings and fenders.

T-Dock area Anglers are catching small mangrove snapper on cut baits. Most are too small to keep, but quite a few are keepers. Also, there are still mutton snapper being caught, but they are just shy of the 18-inch minimum to be kept. For those tossing small jigs and spoons, there are plenty of jack crevalle and some Spanish mackerel being caught. Snook fishing has been hit-or-miss. Catch them on the incoming tide on live pigs and pins; nighttime on both tides the snook can be caught on plugs and larger swim baits.

Surf area, both sides: The south surf is slow due the big swell from the offshore storm clouding the water, as well as seaweed. Snook and redfish are possible this time of the year if you find any bait schools swimming the beach. Jigs, swim baits and any live bait will produce a bite. Also, there are many nurse sharks swimming the beach, so they are a possibility as well. The surf area north is a happening thing, especially if you find mullet schools present. My beach comber fishing friends have reported that the snook and tarpon bite has been good in the early morning and the late evening, with plenty of snook and big tarpon on live baits and swim baits. If you find clean water, nice whiting and croakers are a good bet on cut shrimp and fish bites, but be aware, the pesky catfish are around, also.