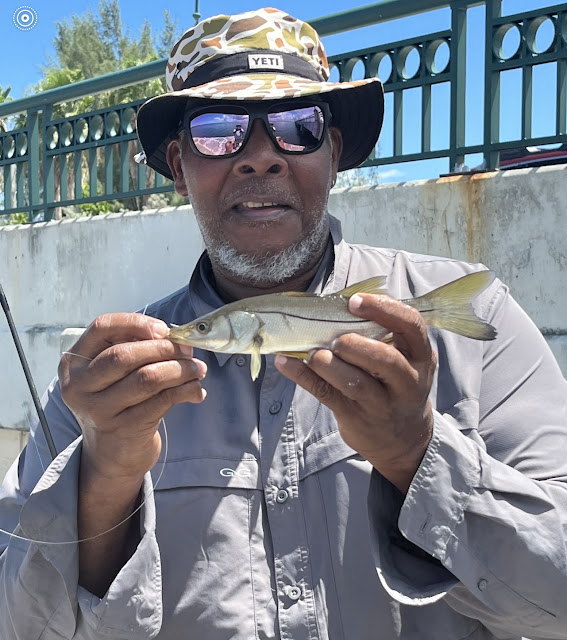 September is now here and it provides inshore fishermen with some excellent opportunities with the beginning of our annual fall mullet run as well as the reopening of Snook season. We have begun to start seeing schools of mullet here inshore ranging from finger mullet to the larger mullet. Lately every morning here at the shop we can see them schooled up out back. Luckily for Snook anglers, there has been plenty of action. Snook have been caught on the beaches, in the inlet, on seawalls, under docks and around the causeways. On the beaches, anglers have had success fishing with live Croakers, Pilchards and by throwing artificials in the mornings and evenings such as the 3” NLBN white paddle tail as well as jerk baits like the Yozuri Crystal Minnow. In the inlet, live Croakers have been the go to bait, you can also try heavier swimbaits in the low light conditions. It is a great time of year to cruise down a canal and fish sea walls with all the mullet around, you can expect to find some Snook hanging along the walls waiting to ambush a school of mullet. Live mullet and top water baits are excellent options for this approach. You can also expect to find some big Jack Crevalle on the seawalls. Docks in the St. Lucie will be holding a lot of fish with the Snook leaving the inlet and heading back into the river after their spawn. Look for docks with deeper water and steady current flow in the afternoons as the Snook will tend to hang in deeper water to stay cooler during the heat of the day. The Snook fishing at the bridges has been quite productive especially at the Jensen Causeway and Roosevelt Bridge. The majority of the action has been coming at night fishing live crabs, shrimp, mullet and artificials like the 8” NLBN paddle tail and straight tail.

Tarpon fishing has begun to pick up inshore for us. Fishing live crabs on outgoing tides around the causeways has produced the most action, larger live mullet will do the trick as well with the fish being anywhere from 40 to 100lbs. We have also heard reports of Tarpon feeding on shrimp at night at the Roosevelt Bridge. Anglers have been finding some success fishing the crossroads and the inlet with live mullet and crabs. If you are looking to fish artificials, the top baits have been the Hogy Slowtail swimbait, NLBN 5” Purple paddle tail and the 8” NLBN Purple paddle tail and straight tail.

There have still been some Mangrove Snappers caught around the bridges and at the inlet. You can fish live shrimp on a jighead to target them, if you want to weed out the smaller ones, you can try fishing a small finger mullet or pilchard to find the bigger ones. A few Black Drum have been caught at the Roosevelt Bridge on crabs and shrimp. We should expect to see more Drum being caught in the coming months. There have also been a few Permit surprisingly caught at the Jensen Causeway east side relief bridge.