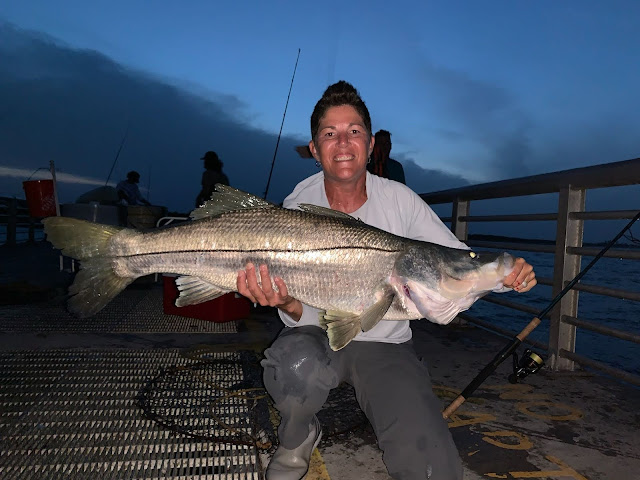 And now for “Snookman” Wayne Landry’s weekly fishing report:  “Good morning, fishing fanatics and inlet sightseers. I hope everyone had a great holiday weekend! To begin, fishing at Sebastian Inlet Thursday to Monday was pretty good, with the north jetty being the hot spot at the inlet. Snook season opened September 1 and the snook went nuts over there! The south side was good, but not like the north jetty. I worked the entire weekend, but fished Friday which was the best day, along with Thursday. After that the fishing slowed down a bit, but was still outstanding. Personally, I hooked 23 snook between 11 a.m. and 3 p.m. Of those, I landed 14 and handed off the rod to five different people after I caught my 31-inch keeper so others could experience catching one. I had four break me off. So, yeah, it was an excellent weekend of snook fishing. I haven't seen it THAT good since before 2011 deep freeze and resulting fish kill. A lot of fish were caught and taken home in those five days. And now for the rest of the report:

North jetty: Snook fishing was the hot topic here. It was crowded but manageable - everyone played well. Many fish were caught, with a lot of keepers taken home all five days. Incoming tide was the preferred tide, but some were caught on the early outgoing at the tip where the boaters were catching fish on croakers, pins and pigs. Up top on the jetty on the incoming, Thursday's bite was on pins, pigs and live shrimp, and they didn't have to be hand-picked shrimp, either - they bit them all! Friday's bite was LIVE SHRIMP only: they would not hit a pin of pigfish. Saturday thru Monday it was live shrimp again, nothing else. I did see a couple caught with pinfish, though. Sunday and Monday, live shrimp were small and scarce since the shrimp boats didn't go out because of the holiday. Working shrimp boats didn't have much to deliver, and they were small, and everyone was complaining about it, but the fish still hit them if you got it out where they were staging. When shrimp are in short supply, catch pins and pigs, as this time of year. Snook will be keying in on them as they come out of the river on the outgoing tides - along with the shrimp that usually start running out as well. The large mullet schools haven't started coming down the beach yet. If it does this year like last year, it's going to be a super "hot" fall season! Looking forward to that again, it was nuts last year! The other species being caught on the north jetty have been the mangrove snapper. They are being caught at the tip on the outgoing tide on live and dead cut greenies, and alone the jetty pilings on the incoming tide. Also still being caught at the tip on live and cut baits are the cubera snappers. I have seen fish up to 33 inches being caught and heard reports of bigger ones being caught by the boaters at the tip. The Atlantic spadefish are still around as well and will take cut shrimp floated to them with a very small split shot sinker, on the incoming tide. Barracuda are still around for those tossing tube lures or live baits to them, but they are being pretty fussy at wanting to bite.

South Jetty:  Fishing has picked up considerably on the incoming high tide. The water is still a bit dirty and weedy, but the snook have moved back in and are biting. I saw several nice keepers caught through the weekend on all live baits and swim baits. Most of the fish I saw were  undersized, but you could see the bigger ones busting into the bait fish schools along the rocks. It got kind of crazy over here as for a bit. Outgoing tide at the tip, the jack crevalle, blue runners and sea bream were biting cut baits - a bit further out, snook were schooled and biting live baits.

Catwalks, both sides: For the most part, fishing on the cat walks has dropped off, except for a few mangrove snappers, but most were too small to keep.

Surf, both sides: On the North side, the surf has been producing nice snook and tarpon for those fishing jigs, swim baits and live baits in the early morning and late evening time frame.  Mullet schools and glass minnows are coming down the beaches, which will get the fish sparked up. It is that time of year for the bait to come down the beaches. Whiting, croakers and possibly a few black drum would be caught on cut and live shrimp in the deeper trough area beaches, along with some redfish. On the South side, anglers are hooking mangrove snapper and a few pompano along with whiting, croakers and sand perch at the south day-use area just south of the inlet, and between there and the south jetty. Find a good spot with clean water. As always, those pesky catfish are ever present on this side as the water tends to be a bit dirtier than the north side.