INSHORE-  The snook bite inshore improved a bit this week.  It isn't full on springtime feeding frenzy yet; but the snook are coming back to life a bit (in other words...they will muster up enough energy to take a swipe or two at a topwater plug these days!).  It will sound a bit like a broken record but: The Loxahatchee River has been good during the day, while the bridges are holding a fair number of snook at night.  The water is still a bit on the cool side, so the snook are not on a heavy all day chew.  It's important to fish the best parts of the tide (you need moving water...they don't want to work too hard yet) for the best results.  The river has also had a fair number of tarpon around, along with a few jacks.  The sheepshead bite slowed down a bit this week, but still a few around for sure.  Palm Beach Inlet is holding the big jacks nicely as well right now. 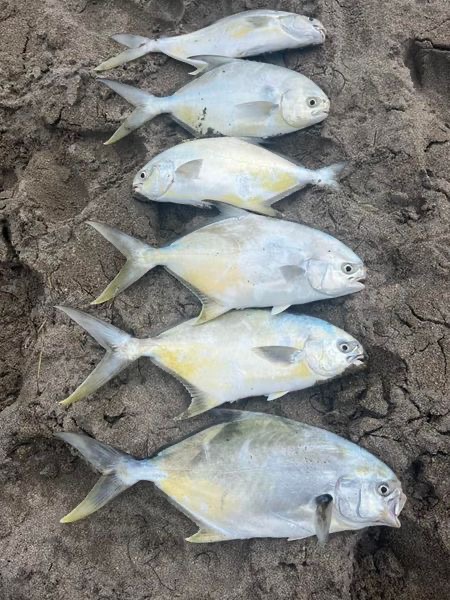 SURF/PIER-  The pompano fishing fired off really good over the past few days; with some of the best numbers of the season coming in.  While the Juno Beach Pier has had a handful of pompano (caught mainly on Doc's Goofy Jigs); a bulk of the pompano have come from the beach between the pier and Jupiter Inlet.  The numbers have been good, and the average fish size has also been good as well.  It's the usual baits (FishBites, FishGum, Sandfleas, Clams, and Shrimp) that are doing the trick on the pomps.  Best bite has been early morning and late afternoon.  Good numbers of croaker and whiting mixed in with the pompano; both of which will eat the same baits.  The croaker and whiting continue to bite very well at the Juno Beach Pier as well.  If your targeting the croaker and whiting specifically it's hard to beat fresh shrimp for bait.  Bluefish bite has been pretty solid over the past few days as well.  While the bluefish will bite silver spoons and topwater lures; it has been hard to beat cut mullet and sardines for them.  A few snook are being caught at the Pier on dead bait still: And reports of some active feeding snook at Jupiter Inlet are coming in as well.  Rough weather slowed shark reports down a bit; but still a good number around from the sounds of things!
Posted by Tony Rose