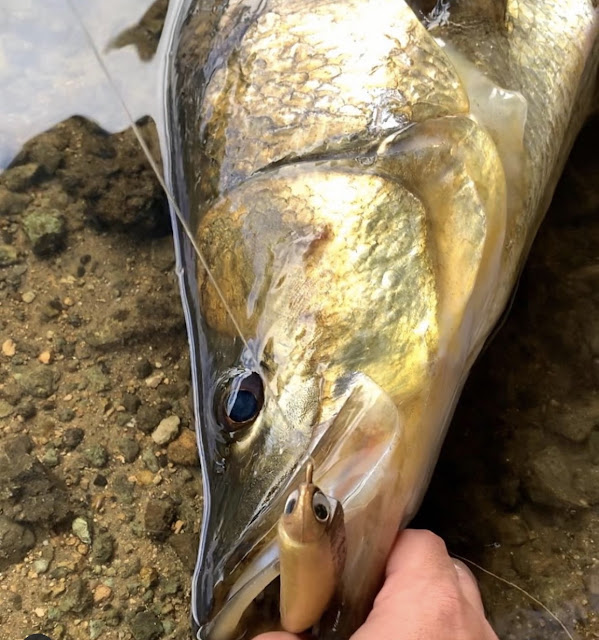 Inshore fishing had its ups and downs during the month of February as we experienced a lot of changes in weather patterns and a lot of inconsistent temperatures. Our inshore fishery starts to kick back up in March as water temperatures start rising, more bait shows up inshore and fish start moving around a little more. If you are looking to target Snook, anglers have been finding them around the bridges pretty consistently on outgoing tides. There have been some shrimp and crabs flowing through with the outgoing tides and the Snook have been feeding on them. A lot of anglers will try to match the small shrimp that we have in our river with either a 2” or 3” artificial shrimp such as a Monster 3x or Thumer Shrimp on a jig head to get the bite. If you are on a boat, it wouldn’t be a bad idea to hit up some sea walls with live pilchards or mullet. We have heard about some anglers finding some quality sized fish sunning on the sea walls. There have been plenty of Jack Crevalles as well to tire your arms out! Some Snook have also been caught fishing live baits around docks in the St. Lucie River and around the causeways. As we get into the spring, you can expect to start finding some Tarpon inshore as well.

There have still been Sheepshead hanging out around structure. Live shrimp on a jig head or fiddler crabs when available are a great option for them. Look for them on channel markers, around the causeways and on older docks with a lot of growth on the pilings. There have been a few Black Drum caught around the 10 cent and Roosevelt Bridge fishing the same method.

If you are looking to head up towards the power plant, it is always a good idea to check the crab trap floats and channel markers for some Triple Tail. You will find a variety of species hanging on the channel markers up that way this time of year including Sheepshead, Black Drum, Croakers, Snappers and even some Flounder occasionally.

According to some anglers that consistently wade fish up around Middle Cove on the East Side of the river and County Line Road on the West Side of the River, there have been some reports of Trout caught fishing top water lures, artificial shrimp and live shrimp in the mornings. They have also been running into some Snook as well.