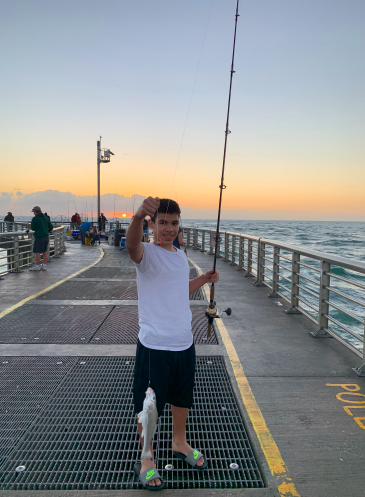 Look for the regular cast of characters, including Spanish macs and blues

Wayne “Snookman” Landry, our fishing guide, says fishing was slow last weekend due to the winds and the silted-up water, but it has cleaned up a bit with the northeast winds we had Sunday. The water has also warmed up to 73 degrees now from the 68 we had last week. That's a good sign.

At the North jetty:  “Fishing has been the same cast of characters: small Spanish mackerel and bluefish being caught on small jigs and silver spoons, and the blues can be caught on any kind of bait, live or dead as they are hungry all the time. Most fish are being caught on the outgoing tide at the tip of the jetty, and the ‘inside’ area drifting the tide with spoons and jigs. Black drum and nice sheepshead are still being caught for those using clams and either live or dead shrimp at the tip also on the outgoing tide, and at the northeast tip area as well. Snook and redfish have been a hit-or-miss deal on live baits at the tip on the outgoing and the incoming tide. Live shrimp, threadfins, pigfish have been the baits of choice for them. Most of the fish have been too big to keep, but several slots have been taken. This time of the year is tough with the water temperatures coming off from being cold and the fish being lethargic due to that, they bite when they feel like it. As the water warms up more and the "spring" mullet start showing up the snook will get into their "pre-spawn" feeding mode and you will see more action on them.”

South jetty: “Small bluefish and Spanish mackerel, using jigs and silver spoons on the outgoing tide. Also, at the tip they are still catching black margates, sand perch and sheepshead on clams and dead shrimp. Incoming along the rock wall is producing small snook and redfish on most live baits with pigfish being the bait of choice here. Also, the bluefish and mackerel can be caught as well throwing to the channel area.”

T-dock area: “Back here is pretty much still the same also, with the bluefish and Spanish mackerel being most of the fish being caught — small jigs and silver spoons are the lures of choice. Sheepshead are being caught around the dock pilings and along the rocky shoreline, both tides on dead shrimp.

Surf area, both sides: “The water is still silted up quite a bit from the surf and the winds, but as it warms up as it has been doing, expect to see more pompano and possibly black drum, especially if it cleans up more. They can be caught on sand fleas and dead shrimp. The blues and Spanish can also still be caught for those throwing spoons in the surf.