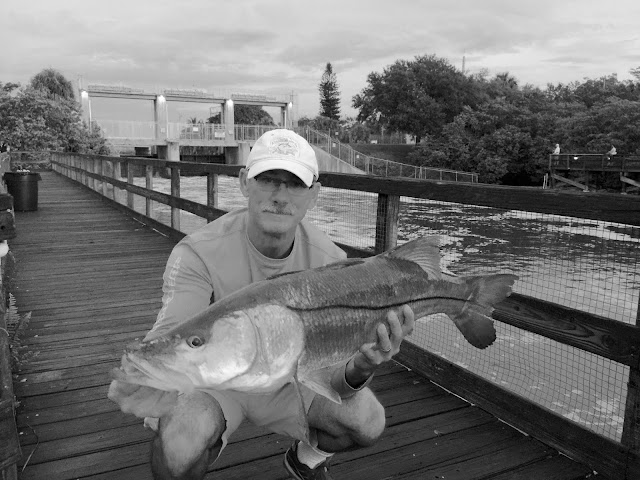 When Rain Water Flows Swiftly At The Spillways, Game Fish Will Converge.

STEVE WATERS ON OUTDOORS
For more than 40 years, Tom Greene has caught snook everywhere from the remote mangrove islands and unnamed creeks of Everglades National Park to the bridges and inlets along South Florida's Atlantic coast.
But among his favorite snook spots are the spillways where the contents of rain-swollen freshwater canals are dumped into saltwater canals. With the rainy season finally here, the next several months should be prime time for catching spillway snook.
"Spillway fishing to me is the easiest fishing of any fishing in the world," Greene said. "When you get that discharge of fresh water, all these fish in all these back canals will go to the spillways just like salmon go up rivers, because that's where the snook get fed the best."
When the spillways are opened to release the water dumped by rainstorms, small freshwater fish such as shiners, shad and bluegills are swept through the spillway by the moving water. Snook, which apparently can sense the sudden influx of fresh water, congregate at the spillways to gorge on the baitfish buffet.
Greene, 55, has lots of spillway memories. He'll never forget an outing at the Boca Raton spillway, mainly because his sister won't let him.
"The Boca spillway in the C-15 Canal opened in 1970," Greene said. "My sister got married that day.

"I went to the spillway and caught 17 snook that day. The reason I remember is because I missed my sister's wedding, and I was one of the ushers. My name has been mud ever since. But I caught 17 snook. I couldn't leave 'em."
Posted by Tony Rose