Thur. trip up to the beach was a little unusual as I cannot remember a pompano trip where we landed more permit than pompano! My son Randy and I met up at Blue Heron around 7 and after the sun came up it was evident the water had turned to a dirty shade of green and after catching a few catfish we packed it in and headed to Stuart beach. The water there was much better but after a couple of hours all we had to show for our efforts were catfish and one ladyfish. Randy and his father-in-law Barry Rashkin were fishing short rods and catching a few decent whiting and croaker but the bite was definitely slow. Just before the change of the tide we got one decent hit and put a keeper pompano in the cooler. About 15 minutes after the pompano, one of the long rods got hammered and when Randy set up on the fish I the fight was on. I told him it's pulling like a nice permit and 10 minutes later we landed a beautiful big permit. After a couple of pictures we released it and rebaited with Crab Fishbites that was on that rod. Five minutes later the rod goes off again and another permit run took Randy up the beach. We landed this one also and took a couple of pictures before we released him. Two permit in twenty minutes will certainly make your day and although the pompano didn't show up, these two beautiful game fish made the day. I have to say our population of permit and bone fish along the beaches has been increasing every year and hopefully that trend continues. There are a lot of anglers that spend a lot of money to fish in the Keys and the Bahamas for these great fighters and we are awfully lucky to have surf fishing that now includes these sought after game fish that are available for us to play tug of war with. If you are lucky enough to hook and land one of these great fish, please take your pictures quickly and get them back into the water so they can make someone else smile when they do catch one. I have caught a couple of permit and bonefish on live sandfleas but the majority of the ones I have caught have been on EZ Flea or Yellow or White Crab Fishbites. Today I did the "coaching" and Randy did the catching. It is hard to imagine that there is any better surf fishing opportunities than what we have available to us along our Treasure Coast. 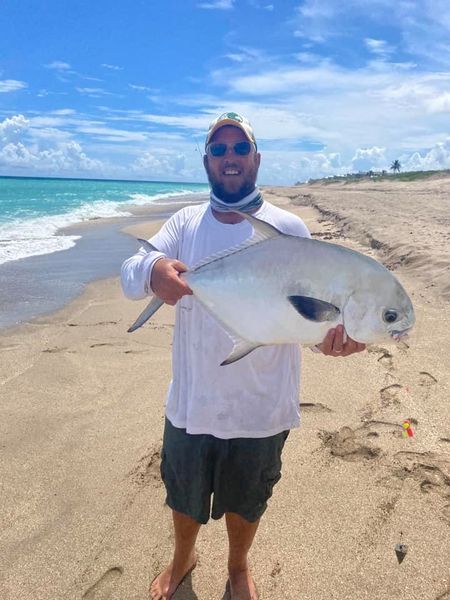