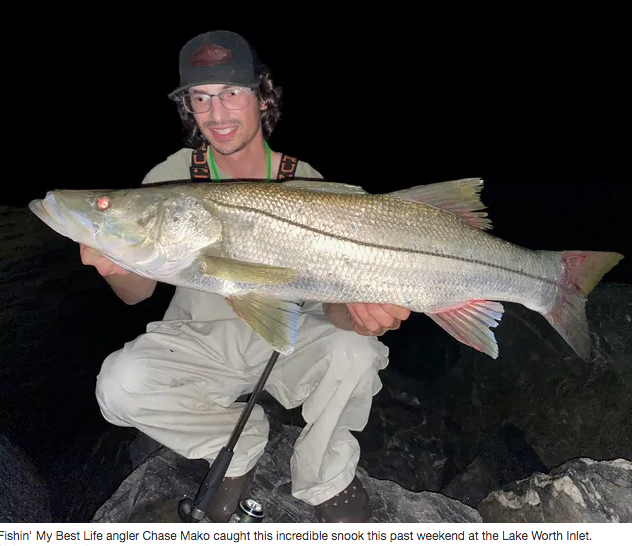 Along the beaches in St. Lucie and Martin County the pompano fishing was still really good before the waves went completely crazy. Big rods and long casts are still the rule with Yellow Crab and Sandflea-flavored Fishbites, along with real sandfleas, have been working well.

Also, on the beaches they've been getting permit on the same baits and rigs.

The mullet run is still going strong with millions pouring in through the St. Lucie Inlet and into the St. Lucie and Indian Rivers.

The snook are lined up for the buffet and are being caught along the bridges in big numbers. The fishing for them has been fantastic with one angler calling it a "10 plus 1." For bait, it's hard to beat a live mullet right now.

On the flats up by the powerplant and the Herman's Bay area there has been a good seatrout bite. They're hitting everything, but shrimp on jighead is working really well.

Along the beaches in Jupiter the recent massive seas should have a lot of the crabs stirred up. This could mean good action for mutton and mangrove snapper at the Jupiter Inlet and the Juno Pier in the coming days.

In addition to the large schools of mullet moving down the coast and through the Jupiter area, the big north swell from Teddy may have kicked off the bluefish run. Working from the beach, anglers should use one-and-a-half- to two-ounce silver spoons in the milky water. The fish will see the flashes. In addition to bluefish this is a good way to get hooked up with jack crevalle or a nice snook cruising the shoreline. For anglers targeting snook, live mullet are best bet from the beach and at the bridges in Jupiter. To get that one mullet to stand out among thousands of others, however, get yours under the school by using a small weight. If going with an artificial a red tail hawk jig from the bridges will work. From the beaches, or from a boat along the beaches, try a lure with a lip in the front so when you're reeling it's going down in the water column.

For inshore fishermen in the West Palm Beach area, the past few days have been phenomenal! The mullet run is in full force with massive schools in the Lake Worth Inlet as well as up and down the surrounding beaches. One huge school that moved through the inlet was filled with tarpon, jack crevalle and snook all in a feeding frenzy. On the bridges throughout the West Palm Beach areas and at the Lake Worth Inlet, the snook and tarpon bite has been very productive at night. Throw big swimbaits, Flarehawk jigs or anything that matches the size and profile of a big mullet or ladyfish for both snook and tarpon right. If you are fishing in a large, active mullet school and getting no bites, one option is to scale up your presentation to something larger that mimics something else feeding on.

Around Ibis Island and the north end of Hypoluxo Island there has been a good snook bite this week. Top water lures including Zara Spooks and Yozuri Crystal Minnow model F1146-RBK have been hot in the morning hours. Also in the Intracoastal Waterway, tarpon are being caught and released by anglers fishing mullet heads on the bottom near the channel edges from Lantana down to Boynton.

Jack crevallle have been hitting two-ounce Gator spoons in the surf between the Boynton Inlet and Lantana in the early mornings and the late afternoons.

Though the bass bite is still best in the early mornings, that window of opportunity has gotten a bit wider. With the rising lake level, the bass have moved a little deeper into the grass and the bite has been much better on live shiners than anything artificial. For anglers going with an artificial though, flippin' one or three-quarter ounce jigs or dark colored creature style baits has been working. Tin House Cove, Buckhead Ridge and King's Bar have been slighty better than most other area.

There has been a decent bluegill bite, and even better cichlid bite recently. They're hitting worms, crickets and beetle spins.

There have been a few specs starting to bite as well. Look for holes in areas with lots of water hyacinth around King's Bar and Little Grassy. They're being caught by jigging.