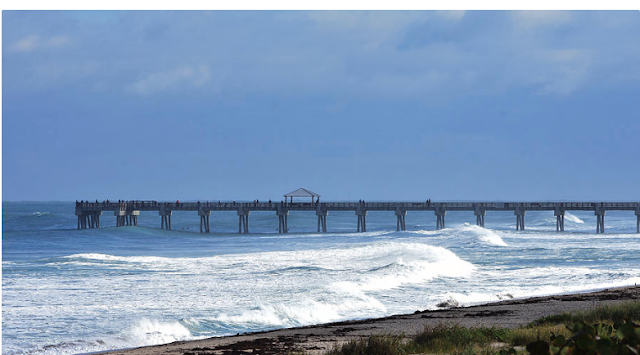 How about this weeks forecast?!!! Its definitely a blowout and looking ahead the seas are not forecast to drop under 10 feet until Thursday night into Friday. As far as fishing is concerned I got a text from friend and local surf expert Barry Richards on Friday. He fished at Tiger Shores where the mullet, sharks, and tarpon were putting on a show. He brought the long rods and had a great pompano bite going for the whole time he was there. As usually is the case with the first schools of pompano that appear along with the mullet, Barry caught and released 32 pompano. Lots of action but just not quite big enough to keep. I fished on Saturday with my sons , Paul Jr. and Randy. We fished at Blue Heron and had the same type of pompano activity and somehow we were lucky enough to put 2 nice keepers in the cooler while releasing all of the rest. EZ Flea and Yellow Crab Fishbites accounted for all of our action. Make sure you have an ample supply of Fishbites in your tackle bag at this time of year because you will go through some baits as these large schools move into the area. I hope when the wind finally backs off later this week the water will clear quickly because we are right on the doorstep of some fantastic surf fishing.