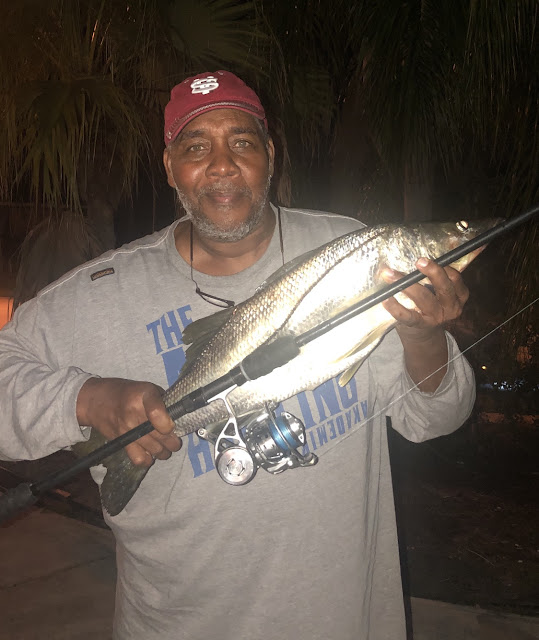 The docks, bridges and sea wall along the St. Lucie River have all been holding snook the past week. Live mullet, pilchards and especially croaker are working well.

Live croaker are available at the Snook Nook.

Hole in the Wall has also been a hot spot for snook when the schools of bait are moving through.

There are also good numbers of tarpon around. Anglers working the St. Lucie Inlet and the north fork of the St. Lucie River are having a blast catching these big-time fighters using live mullet. They are also being caught around the Jensen Beach Causeway in the evenings.

Spanish mackerel are being caught along the area bridges spanning the St. Lucie and Indian Rivers as that season keeps turning on.

Along the beaches in the Jupiter and Juno Beach areas, there has been good action for snook, tarpon and jack crevalle.

They are all following the schools of finger mullet that have been making their way down the coast and in some cases into the Intracoastal Waterway and Loxahatchee River.

For the snook, artificial lures resembling finger mullet have been working well. Just remember to "match the hatch" and use lures that are the approximate size of the mullet that are in the area. Right now, that is in the four- to five-inch range.

In a sign that the season could be turning on, there have been a few small schools of mullet around and traveling into the Boynton Inlet the past week.

The ones that are making it into the Intracoastal Waterway are getting hammered by jack crevalle, tarpon and snook as they move along the flats.

Anglers working the jetties at the Boynton Inlet have been catching good numbers of snook using small sardines, greenies and menhaden. Most are being caught on the slack tide, inside the north jetty.

Anglers working the docks around Manalapan at night are having a blast catching snook. The bite has been best around the lighted docks and they are hitting small Yo-Zuri crystal minnows as well as small, live finger mullet and greenies.

Another hot spot for slot-size snook has been the Little Ocean Avenue Bridge. They are congregating around the mangroves in ambush positions and are being caught freelining live baits.

The other area bridges are also holding snook. The key has been casting downstream and retrieving upstream both live and artificial baits.

The bass bite has been a little slow the past week and is still in a typical summer pattern. The bite has been best first thing in the morning using spinner baits and swim jigs in either white or chartreuse colors. When that bite slows down after about an hour and a half, switching over to flippin' and pitchin' into the reed heads will keep the action going. Flippin' and pitchin' creature-style baits in black, blue or june bug colors has been working well.

The crappie bite is still good with white and chartreuse jigs worked around floating vegetation being the key the past week. How good has the bite been? One angler reported catching his limit three out of 10 outings. King's Bar, Little Grassy and Buckhead Ridge have been good.

Be advised the lake level is coming up quickly and risen approximately six inches in the last 10 days.