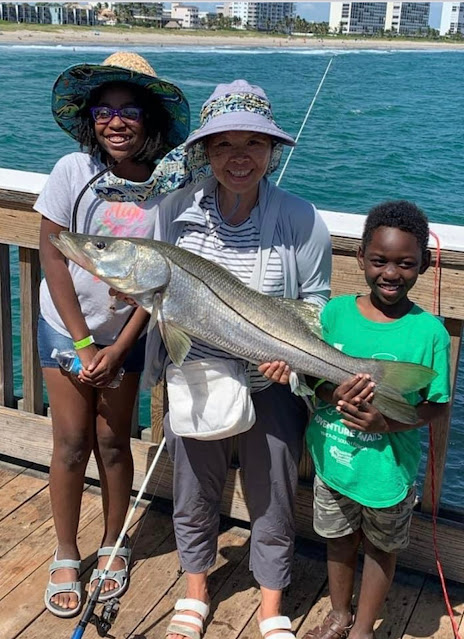 The snook bite remains solid in the St. Lucie River. Though the docks along the river are still the top spots, the seawalls are also producing good action. Live mullet and croaker are working best.

At the St. Lucie Inlet, the Jensen and Stuart Causeways and at the Northfork, there has been good action for tarpon. Live mullet are working best and if you're looking for a monster, they've mostly been lurking in the inlet.

Sheepshead and tripletail are being caught with more frequency the past few days. They are being found around structure and the channel markers. Shrimp on a jighead is working best.

Along the beaches in St. Lucie and Martin County the pompano bite continues to improve. Though there are still quite a few shorts, the ratio of keepers to shorts has gotten better since last week. Sandflea and Electric Chicken Fishbites are best right now.

Like areas to the north, there are pompano beginning to move into the Jupiter area.

There are also big schools of mullet moving down the beaches in Jupiter and Juno with plenty of snook, tarpon, big jack crevalle and even a few sharks giving chase and hammering them.

Schools of mullet are also making their way through the inlet and up into the Loxahatchee. Anglers working the docks and seawall, as well as a few of the sandbars are having good luck. Use live mullet for bait and work the ambush points.

Anglers working the inside south wall at the Boynton Inlet are reporting catching moonfish using eighth ounce yellow or chartreuse jigs. Look for the glass minnows flicking the surface, the moonfish have been right beneath them.

In the Intracoastal Waterway around Lantana and down to Boynton, snook were seen hammering schools of mullet early Wednesday morning. They are ambushing the schools along the seawalls and in the channel behind the inlet.

There have also been schools of big jack crevalle getting in on the buffet. Rod bending fighters up to 25 pounds are hitting live mullet and plugs including Yo-Zuri Hydro Pencils, Zara Spooks and large poppers fished along South Flagler Drive and at C-51 canal spillway.

There have been a few reports of redfish hitting cut mullet around the flats on the southeast side of the Lake Worth Bridge and on shrimp around the Snook Islands.

Though on Wednesday morning Capt. Larry Wright said the action was little slow, the bass bite two and three days previous had been excellent. He said he had his clients in 40 fish on Sunday and 39 on Monday fishing in Cody's Cove. Though the bite has been better in the early morning, there have been a few afternoons in which the bite was good. Live shiners worked on the outside edge of the grassline has been working best. If you're going with an artificial, flippin' Double Wide Beavers in green pumpkin has been working.

Anglers working the canals in West Boynton Beach and along 441 are reporting good action on snakehead and peacock bass. Pretty much any topwater plug or lure in frog patterns with an orange belly has been working.

The spec bite has picked up a bit more the past week with the best spots being on the east side in the J&S Canal. Cocaine jigs worked in the Kissimmee Grass, the thicker the better, has been the key.