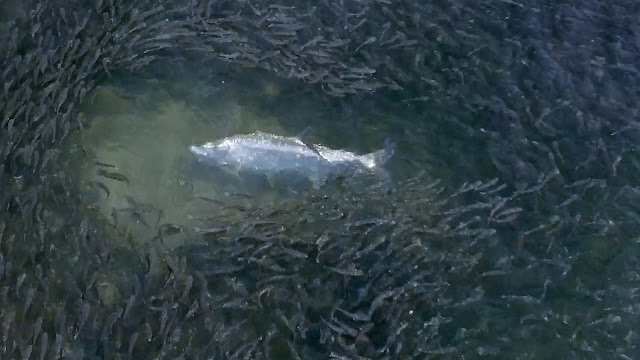 MULLET ON THE MOVE

The next few weeks should be very interesting anywhere near area beaches, inlets and inside the Indian River Lagoon. It's Fall Mullet Run time and the bait fish are beginning their annual migration.

Schools of the small fish are starting to gather and move north to south. The schools of 20-50 mullet are starting to grow larger and will soon number in the hundreds and greater. On the beach, expect to see predators such as large redfish and black drum near Sebastian to tarpon and sharks closer to Fort Pierce. Around the inlets, snook, pelicans and jack crevalles will pound the mullet. In the lagoon, trout, ospreys and wading birds will take their share.

The full moon this weekend may trigger the increase in the migration and certainly by the new moon in two weeks, the run will be fully engaged.

Capt. Billy Rotne of New Smyrna Beach steered an angler to an unusual catch Tuesday. His angler was using a 6-weight fly rod and tossing a black and purple Caloosa Flats' crab while sight casting fish in 2-3 feet of water. He had a pickup from what looked to be a redfish. But when he reeled it in, the fish had the profile of a black drum yet without the vertical bars. It also looked a lot like a redfish, yet without the copper color or telltale spot near the tail. Rotne, who has a great background in marine biology, said he has heard of hybrid fish in captivity, but never before had caught one in the wild. Other catches include tarpon, snook and trout. Tarpon will take live bait.

Early morning is the best time find the mullet on the beach. Spoons, topwater plugs in mullet patterns and swim baits are the best lures to use if trying to hook up with one of the tarpon feeding in the mullet schools, or snook and jacks in the trough. For long rod fishermen, use Fishbites or clam strips to catch whiting, croaker and the season's early run of pompano moving south now.

On Wednesday night, the Inspiration4 SpaceX flight launched high into the sky above the Space Coast. At the inlet, there were hundreds of observers in attendance, although they were primarily focused on the outgoing tide and whatever was going to bite. No fewer than 15 boats were drifting the inlet with live baits catching redfish and snook. At least eight more boats were anchored on the end of the north jetty fishing for snook probably with live croakers. And of course, the jetty deck was standing room only with scores of anglers fishing off all sides for snook and redfish.

The mullet schools will certainly energize the action throughout the lagoon system. Expect to catch black drum and redfish in the Titusville area by finding them rooting the bottom behind schools while seeking crabs and worms. Snook will be found at ambush points like the corners of seawalls, behind dock pilings and along channel edges. Tarpon will be caught near deeper channels and in residential canals behind waterfront neighborhoods.

Headwaters Lake is fishing better than any other lake in the region right now. Even with the high heat, anglers are catching bass to 7 pounds fishing with wild shiners. Catfish can be caught in the Little Econ using chicken livers.

Report courtsey of Ed Killer is florida today's outdoors writer. Friend Ed on Facebook at Ed Killer, follow him on Twitter @tcpalmekiller or email him ated.killer@tcpalm.com.