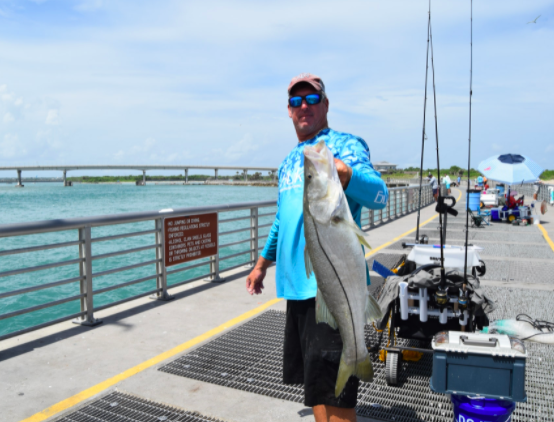 Snook season is here... and things are getting lively again, especially with snapper and Spanish mackerel

Last week, our stalwart fishing guide, “Snookman” Wayne Landry told us how cloudy water was keeping the baitfish away. This week, he reports that fishing has picked back up again with clearer water and plenty of baitfish, greenies and pilchards cruising around the North Jetty.

“Mangrove snapper are back, but most of them are small with a few keepers being caught,” Wayne says. “The Spanish mackeral showed up again with quite a few being caught last week. Several were really nice sized, around 18 to 20 inches, 2 to 3 pounds.”

Anglers are also catching 5 to 8-pound Cubera snappers on the jetty with live and dead majorras. Some are also using majorras to catch redfish ranging between 28 and 30 inches. There are plenty of jacks and blue runners present as well. The daytime catch-and-release snook bite has slowed quite a bit with the bite coming at night now on bucktail jigs with fish averaging 34 to 40 inches. Snook season opens Sept 1st with the size limits being min 28 inches and max being 32 inches, with the tail pinched, with only one fish per person per day bag limit.

South Jetty: Wayne says the bite here has been pretty slow as the water is still cloudy and weeded up from the southeast winds and the swell.

Surf fishing is improving with baitfish showing back up. Tarpon, jacks, snook, Spanish mackeral and sharks can all be present when you find the bait. Wayne has seen quite a few large schools of mullet running down the beaches and around the jetty, adding that, “hopefully means the fall mullet run maybe going to start.”