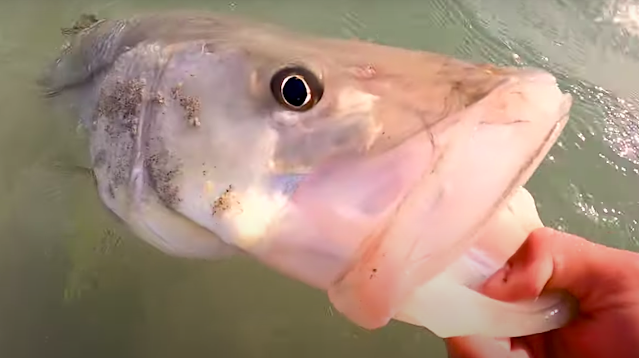 In St. Lucie County the snook bite is still excellent. The St. Lucie Inlet is still the main hot spot, but more and more fish are being caught along docks and bridges in the St. Lucie River. Live croakers are still by far the top bait to use and they are available at Snook Nook.

At the Crossroad and the inlet, the tarpon bite has been solid. The Stuart and Jensen Causeways during the outgoing tide are also producing good action. Crabs have been working well.

If you're looking for a fight, there are plenty of jack crevalle along the seawalls that are more than willing to bend a rod.

North of the Jensen Causeway, on the west side of the river, there have been some decent schools of mullet the past week.

Along the St. Lucie and Martin County beaches, anglers are catching croaker and whiting in the first trough using shrimp or Bloodworm-flavored Fishbites.

There are also some snook still cruising the beaches.

Working the small schools of glass minnows, a couple fly fisherman have caught tarpon along the beaches.

At the Jupiter Inlet, the story has been snook. They are being caught almost completely on live baits including croakers and pilchards.

Though the Boynton Inlet has been packed with anglers the last few days there hasn't been a whole lot to woohoo about.

The bass bite is still a little slow, but not bad.

Capt. Larry Wright had his clients into 18 on Sunday with a respectable six-and-a-half pounder in the mix and 21 on Monday with a few in the five-pound range. They were all hitting on live shiners fished on the edge of the grass in the early morning.

Though the live bait is working, anglers are reporting that Rat-L-Traps and Square Bill Crankbaits in red are also getting hits.

After the morning bite starts backing off, fippin' a small creature bait can keep the action going.

The Worm Cove area has been good the past few days.

On the east side of the lake, in Henry Creek there have been a few specs caught using cocaine jigs worked in the Kissimmee grass.