Our intrepid and charismatic fishing guide, “Snookman” Wayne Landry reports that that fishing has picked up considerably this past weekend at the North Jetty. Look for hoards of mullet coming down the beaches to this fishing paradise.

"Lots of snook are being caught on live bait, with live shrimp being the bait of choice for most of the catches and live pigfish being the other bait snook want,” Wayne says. “Most of the fish are averaging 33 to 40 inches that I have seen with quite a few ‘lot size’ fish being taken home by some lucky anglers.” 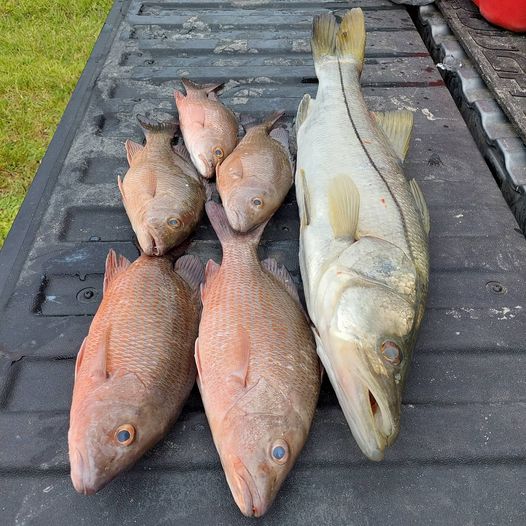 Mangrove snapper fishing is also picking up, and Wayne says they’ve had time to “grow up” a bit. He’s seeing them in the 11 to 14-inch range. They’re being taken on live bait, such as mojarra and pichards, but cut bait is also working. Mutton snapper are also showing up, but Wayne has only heard of a few at the 18-inch range that can be taken.

“Several redfish have been caught with most of them being too big to be kept (minimum size being 18 inches and no larger than 27 inches),” Wayne notes. “Spanish mackerel are around, but not in any numbers to speak of. Also, there are plenty of large barracudas still lurking around the jetty looking to devour your catch.”

Water clarity and snook fishing has improved at the South Jetty, and are fish being caught on live baits, shrimp, mojarras and pigfish. Some slots are being caught as well. Wayne say redfish and snapper are present along the shoreline and jetty and some are being caught in the surf area just south of the jetty.

At the surf, the is water cooling down a bit and clearing up. Mullet are running down the beaches, which means snook, redfish and jacks could be on the hunt.  Wayne’s tip: “Find your favorite spot, grab your cast net and look for the birds diving in the water to locate the schools of mullet. The gamefish will be chasing them.”