Our intrepid fishing guide, “Snookman” Wayne Landry, reports that fishing has dropped off at the North Jetty due to the outgoing tide carrying storm runoff from the mainland via the Sebastian River and the Indian River Lagoon.

“Some Snook are being caught from the tip of the North Jetty with live pigfish, especially from the boaters who can get out to the clean water,” Wayne says. “There are still plenty of finger mullet on the beachside and in the surf. That is where the focus has been for the late evening and very early morning.”

Fishing from the South Jetty has picked up quite a bit, Wayne says, noting the finger mullet around the jetty and clean and calm water.

“I saw quite a few ‘slot size’ redfish being caught from the jetty and along the shoreline area and even in the surf on that side as well,” Wayne says. “The guys told me also that the mangrove snapper bite is pretty good to on the south side. The snook bite has slowed some, as most of the catches are coming at night with bucktails and live pigfish being the bait of choice.”

The main attraction for the surf anglers on both sides is the presence of all the finger mullet around, Wayne says. It’s a veritable finger mullet love fest.

“Snook and redfish have been smacking up finger mullet pretty good, especially when it is roughed up a bit surf wise,” Wayne says. “They like that. The best time has been real early or later in the evening just before dark using live mullet.”

Today’s angler of the week is Steve Studenc of Orlando, who landed his first flounder (21", 4.5 pounds) using a dead mullet. "We caught live bait but this mullet didn't live long on my hook," he quips. 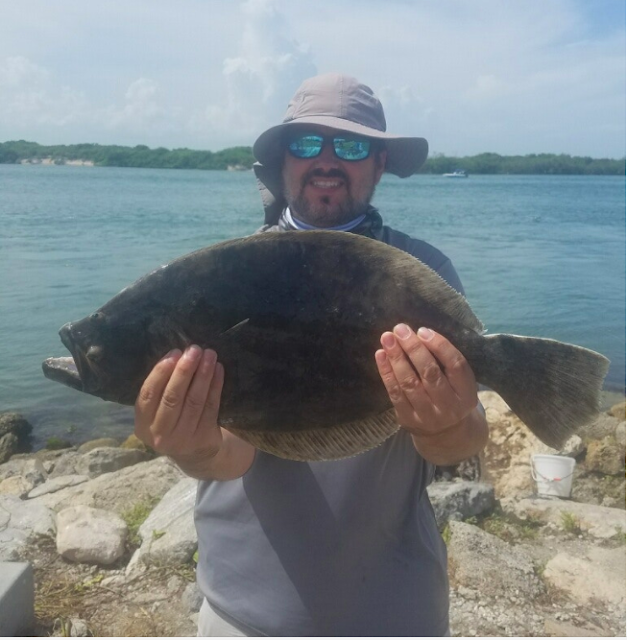