Remember you must have a snook permit, it's one per person per day and they must be at least 28 inches, but not over 32 inches.

The snook bite is still red hot at the St. Lucie Inlet with plenty of slot and overslot fish being caught.

The docks along the St. Lucie River have been holding snook as well with the early mornings and late afternoons being the best time to target them.

The Stuart and the Jensen causeways are still good for snook during the outgoing tide.

Snook are also still cruising the beaches and are being caught by anglers at the Ft. Pierce Inlet.

Though mullet and pilchards will work, live croakers are by far working the best and are available at the Snook Nook.

Mullet are being found along the west side of the river up near the powerplant.

At both causeways there is still a good tarpon bite during the outgoing tides. Use live crabs or mullet.

Around the powerplant up to Ft. Pierce, there have been reports of flounder and a few redfish being caught. Live shrimp and pilchards are the best bet.

Working the beaches from Lake Worth down to Ocean Ridge, surf anglers are catching permit, palometta, jack crevalle and snook.

For the permit, live crab on a five-ounce surf rig are bringing fish up to 25 pounds.

Cut mullet, shrimp or sand fleas on a standard pompano rig are working for palometta.

The snook and jacks have been hitting two-ounce Gator spoons at sunrise along the shore reefs just south of Lantana and again just south of the Boynton Inlet.

In the Intracoastal Waterway around the Boynton area, there has been good action for both snook and tarpon.

Big tarpon, up to 90 pounds, have been holding around the rubble piles throughout the ICW. Use live herring, greenies or sardines free lined back to the rolling fish.

Snook action around all the area bridges has been on fire this past week. Using live pinfish, small grunts and herring fished on the bottom has been very effective. Also using two-ounce bucktail jigs, flair hawk jigs, D.O.A. TerrorEyez and Rat-L-Trap lures bounced or retrieved slowly near the bottom will also work well.

There are still bonefish being caught on the flats near the Boynton Inlet. Small jigs tipped with shrimp during the first two hours of the falling tide has been best.

With the heat of summer, the bass fishing is still a bit tough.

That said there's still a decent bite during that first hour in the morning on swim jigs. After that switching to flippin' frog-style baits or pitchin' a black and blue junebug can keep things going a little longer. King's Bar, Tin House Cove and Third Point have been the better spots.

Though the shellcracker bite has backed way off since the last full moon, if you're looking for panfish-style action, the cichlid bite has been excellent in the canals along the lake. They are good eating and there's no size limit or numbers limit. Red worms, wigglers and crickets. 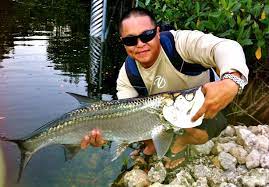 They're moving water from the rim canal into the lake and, though a lot of folks don't know about it, there tarpon in those areas and they get active. They can be seen rolling in the J&S Canal by the hundreds some days and are up to 60 pounds.

If you're looking to target tarpon on the lake, fishing guide Cody Davis is extremely knowledgeable about the subject.