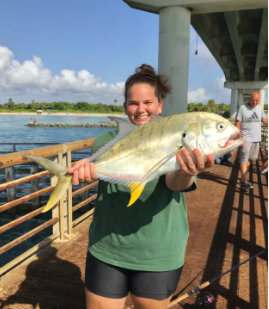 Snook bite slow at the North Jetty, but plenty of snapper, mackerel and jacks

Our illustrious fishing guide “Snookman” Wayne Landry reports that the daytime snook bite wasn’t happening on the North Jetty last week (even though snook season opened last Wednesday). The fishing was better for boaters working the tip of the North Jetty, with fish of all sizes being caught on live baits, croakers, mojarra, pigfish and pinfish. Meanwhile, the land-bound crew switched to a late evening incoming and nighttime bite with fish being caught on flair jugs, swim tail grubs and live pigfish.

“There are still plenty of finger mullet and pilchards around the jetty attracting the normal cast of characters: mangrove snappers, Spanish mackerel and jack crevalle,” Wayne tells us. “Some redfish are possible as well. The water temp is coming down a bit from 85 to 79, which in time will turn on the bite even better — if the finger mullet keep coming.”

The water clarity has improved at the South Jetty and snook are being caught on live croakers, pigfish and mojarras on the outgoing tide at the tip and alongside the rocks west of the bridge. Small mangrove snappers — some being keepers — are also being caught on small live baits as well.

Surf fishing has been less than ideal because the waves we had a few days ago muddied the surf. You’ll likely hook catfish in the silted waters, but Wayne says that if you find a clean spot, whiting and croakers are out there. Should you find finger mullet running in the surf — which they are now — cast net and fish them because snook, redfish, tarpon and Spanish mackerel may be chasing them.

This is the time of year when our fall mullet run starts, and when that happens and picks up a lot, all kinds of good fishing happens,” Wayne says.