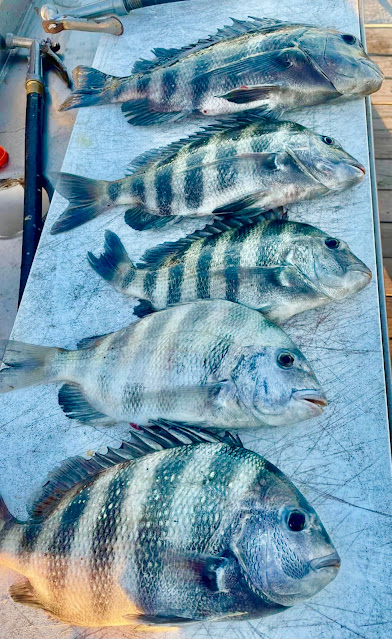 INSHORE-  Sheepshead action has been good inshore; and a passing cold front should help keep them fired up.  A pretty decent number of sheepshead in Palm Beach Inlet; with live shrimp being a great way to go bait wise for them.  Also a fair number of sheepshead inshore around local bridges and boat docks.  Jacks have also been cruising Palm Beach Inlet in decent numbers.  A passing cold front this weekend should help fire the jacks up along the north jetty.  Catch and release snook fishing slowed a bit this week, but still a handful of fish biting.  Live shrimp or a shrimp jig fished through shadow lines with good current should find a few snook.  Smaller baits are thew way to go for the snook right now.  Cooler water slows down their digestion, and they just don't want to work as hard to chase down a meal.
SURF/PIER-  Fishing was a bit slow this week along the beach and at the Juno Beach Pier; not overly surprising as conditions became very calm and clear early in the week.  The calm clear water makes for a nice beach day, but does little to help fishing in the wintertime.  A few Spanish Mackerel were biting white crappie jigs at the Pier early in the week.  Scattered bluefish were caught along the beach from the pier to Jupiter Inlet, but not in any large numbers.  Pompano reports were slim as well this week.  It does sound like fishing was a little better up to the north.  Hobe Sound seemed to be holding a few more fish; especially early in the morning and late in the afternoon.  The Spanish Mackerel, including a fair amount of jumbos, have filled into Peck's Lake in big numbers (For new readers, and/or those who just don't know what "Peck's Lake" is; it is an area south of St. Luice Inlet in roughly 20-30' of water that holds a large population of winter/spring Spanish Mackerel.  While schools of Mackerel may push into casting range from the beach; most are caught from the boat.)