In the St. Lucie River, anglers working the channel markers, docks, bridges and almost any structure are finding a mix of sheepshead, black drum, croaker and tripletail. Shrimp on a jig head has been working for all four.

Though there have been a few caught at the Jensen and Stuart causeways and on the Sailfish Flats, the pompano bite has been a bit slow in the river. A few more cool fronts and some cooler water should start bringing them inside in the near future.

The forecast winds and rougher seas this weekend should help boost the pompano bite along the beaches. The waves help churn up the sand and expose the sandfleas which gets the pompano action firing.

Along the beaches in Jupiter, as well as at the Jupiter Inlet and Juno Pier, there remains fun action for Spanish mackerel and pompano.

For the Spanish mackerel, spoons are working as are Got-Cha lures.

The pompano are being caught using frozen shrimp or clams in conjunction with Fishbites.

Also along the beaches there have been good-size schools of bluefish moving through. Not big fish, but some good numbers.

On the north jetty there have been mangrove snapper caught on cut mullet and shrimp worked around the pilings.

Along the beaches, from South Palm Beach down to Delray Beach, surf anglers are catching small pompano along with whiting and croaker that have been hitting cut shrimp and sand fleas.

At the Lantana Bridge, anglers have been catching sand perch and small mangrove snapper on cut shrimp. Sheepshead have also been caught on live crab and shrimp around the pilings of the bridge. The best bet has been to fish the sunny side of the pilings.

Like last week, the speck bite remains fantastic right now. Anglers working in front of the pier are faring best using jigs while other hot spots, including the Taylor Creek lock area over to Nubbins Slough, have been best using minnows. For night anglers, minnows seem to be better than jigs. Anglers targeting these tasty pan fish are regularly getting their limits right now The bass bite has been decent the past week with the southeast side of the lake being really good. Live shiners are still working better than any artificial baits. If you're determined to fool, rather than feed them, however, Senkos or flippin' and pitchin' creature-style baits have been effective. 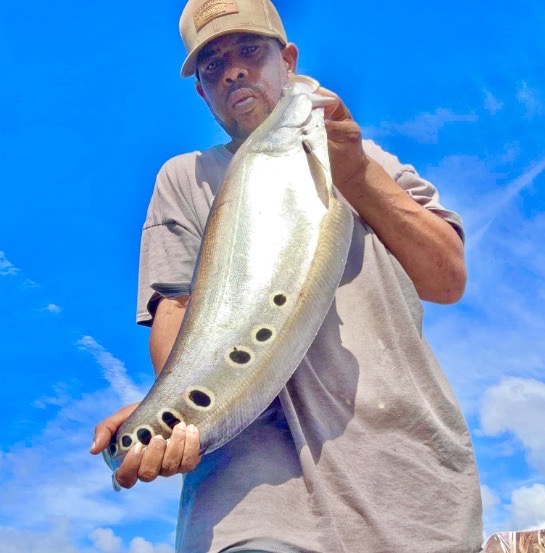 Sunshine and largemouth bass, clown knifefish and specks are being caught using live shad, shiners or minnows on white or chartreuse eighth-ounce jig heads around the bridges, docks, weed edges and culverts.