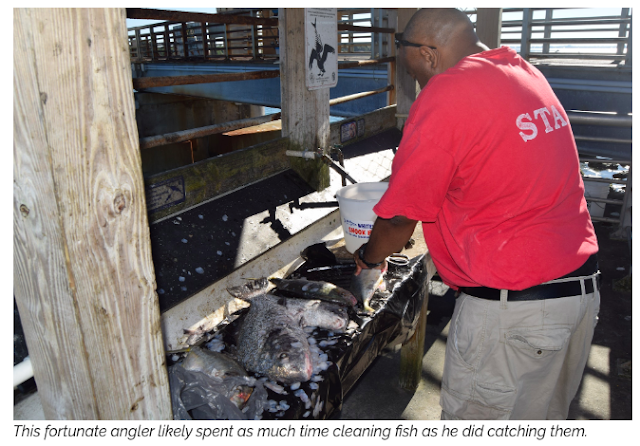 More of the north jetty has reopened! Look for black drum, sheepshead, redfish and more!

“Good morning, fishing fanatics out there. I hope everyone had a nice, long weekend and stayed warm! It was brisk out there for us. I have good news. I am very happy to inform you  that Sebastian Inlet State Park has reopened at least half of the north jetty to fishing. Additional areas will reopen in the coming weeks as parts need to repair the grates arrive. We're halfway there! My park management team also asked me to please remind everyone that there are rules and regulations to be followed while fishing the jetty. Please abide by them for everyone's safety and enjoyment. They are posted on the large white sign on the approach to the jetty, as well as at the information kiosk at the parking lot as you go out to the jetty. The fishing has been pretty good, but with only half of it open, it gets crowded. Please have patience and respect and be courteous to your fellow anglers so all will have a good time. Thank you. Now off to the golden report.

North Jetty: Fishing here has been pretty awesome for the boaters at the tip of the jetty, both tides, but now that the jetty is halfway open, we can get to the fish! Black drum are being caught in good numbers along with plenty of really nice sheepshead, all on live and cut shrimp. Also, they have been catching plenty of nice catch-and-release snook and redfish on the live baits, shrimp and pins and pigs. I was down Monday and last Friday and they were just whacking the stuff out of them! Also being caught on the ocean side of the jetty were many small palometa, ( no size limit or bag limit on those), permit, whiting and a couple nice pompano on Monday. All were caught on cut fresh dead shrimp. In the mix, I saw a couple of small Spanish mackerel on small silver spoons. Along the rock seawall between the catwalk and jetty on the incoming tide on Monday they were catching sheepshead, black drum and lots of small snook. Live shrimp was the key bait for those catches. West of the tidal pool on the north side there have been some decent flounder caught on finger mullet and mud minnows, as well as some small snook and seatrout on small jigs and swim baits.

South Jetty: Here, the action has been pretty hot with lots of fish being caught, mostly on the incoming tide with live shrimp. Snook, redfish, flounder, black drum, sheepshead, bluefish and black margates have all been biting. Also, snook have been biting rubber swim baits. The blue fish will hit anything you toss out, and they have been nice around two to three pounds. Remember, you can only keep three per person. The tip on the outgoing tide is producing pretty much the same thing, same baits as well. On the beach side of the jetty in the surf pocket there have been lots of small undersized flounder caught and a few keepers, 15 to 17 inches. Small shrimp jigs are doing the trick along with small mud minnows.

Catwalks, both sides: The north side is still closed. The south side catwalk is slow. A few sheepshead are still being caught around the pilings on the incoming tide on fiddler crabs, but not in the numbers they were getting. Most of the fish have migrated to the rocky shoreline as they move into the river to spawn. Not any word on the flounder from up there.

T-Dock: Back here the fishing last week was all about the pompano. Tuesday through Thursday on the clean incoming tide they bit pretty good on the small goofy jigs. Several anglers were able to limit out, and the fish were all between 15 and 17 inches. Snook fishing back here is still a happening deal, with fish being caught on large swim baits and various live baits. Also caught last week were quite a few mutton snappers, but they all were too small to keep. Sheepshead are still possible around the pilings with live fiddler crabs. I also received a report of flounder caught back here on both tides on live finger mullet and mud minnows. You just have to find the fish and hang out.

That's all I have for now. The weather is supposed to get back to Florida standards for this time of the year as the week progresses. Grab your gear, get some bait and find your favorite spot to fish - as they are biting - and catch ya some!” - Snookman