The charming and ever-present “Snookman” Wayne Landry, offers up this week’s fishing report:

Good morning, all you Sebastian Inlet lovers. I hope everyone had a great weekend! To begin, It have to say that the fishing has dropped off a bit at the inlet as a whole. Not too much going on after the big swells we had at the beginning of last week that dirtied up the water. Also, the water is still pretty cold, 65 to 68 degrees. But there are some fish biting if you can find clean water, and since the winds have been offshore the last few days the surf has calmed down considerably, so that's a plus. Here’s the scoop: 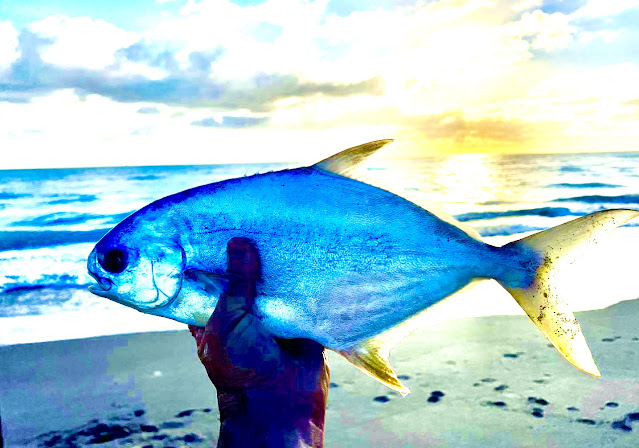 North Jetty: Early last week we were catching nice black drum, whiting, pompano, small permit, catch-and-release snook, all on live shrimp on the incoming tide. In an hour’s time on Tuesday, I caught two drum, a whiting, a snook and three jacks, then it all just stopped. The rest of the week it was stingrays, catfish, many small bonnet head sharks, and some small Atlantic sharp nose sharks. They were everywhere. After Wednesday, about the only thing I saw caught here were many tiny undersized bluefish and a few huge bull reds on the outgoing tide on Kastmaster spoons and jigs. Along the rock seawall between the catwalk and the jetty there were small snook and sheepshead being caught on live shrimp on both tides. The flounder fishing on this side I haven't seen or heard anything positive.

South jetty:  The fishing has been much better, with several species being caught on both tides. Small catch-and-release snook have been biting just about everything you toss out there, live or artificial. Small black drum, sheepshead and some black margates are being caught along the jetty on the incoming tide, and at the tip on the outgoing, along with plenty of small bluefish. Flounder fishing here has picked up somewhat, with some fish I hear being caught on live finger mullet up to about seven pounds. Very nice fish. After the swell calmed down  midweek, there was a decent pompano bite on the beach just south of the inlet - live sand fleas was the bait of choice for them.

Catwalks, both sides: The north side is still closed. There was still a decent sheepshead bite at the south side on the incoming tide for those using fiddler crabs around the pilings. Not much else to report.

Surf, both sides: After the swell calmed down on the north side, there were pompano, black drum and whiting caught on sand fleas and cut shrimp. Also,  there have been many small bluefish biting — some nice ones. They will hit just about anything you throw out bait wise, and silver spoons. The south side is pretty much the same, but with a few more pompano and some black drum and black margates mixed in.

T-Dock area: It’s been pretty slow recently. About the only thing I saw or heard about were small Spanish mackerel and undersized flounder on small white jigs. Catch-and-release snook have also been present on the incoming tide along the shorelines on live shrimp.

Well folks, that's all I have for this week. Not like it was, but that's what a weather change does for us this time of the year. You just have to pick a day, go fish and see what comes up. Have a great week, everyone!” — Snookman