North side: The jetty and walkway are still closed due to construction. The little bit of catwalk you can fish is producing sheepshead on the incoming tide on live fiddler crabs. Now that we have access to the north pocket area, baitfish are in the area and folks are catching small snook, small redfish, ( which are currently catch-and-release only). Also, some nice whiting are being caught for those fishing fresh cut shrimp.

South Jetty: The action has improved, with several different species being caught, mostly on the incoming tide. Small to average-sized snook are still being caught on all live baits and swim baits, ( snook are catch-and-release only now). Small black drum, sheepshead and black margates are biting fresh cut dead shrimp all along the rock wall. Also, small redfish are being caught as well. On the outgoing tide, at the tip and beachside, blue runners, black margates, sand perch and a few pompano have been caught on cut shrimp - the pompano on sand fleas and goofy jigs. The flounder have picked up a bit as well, with the cleaner water around, but expect that to change as the winds become SSW 10-20 mph the next few days. That will dirty the water again and weed it up. Finger mullet and mud minnows account for the flounder mostly. Also, during the past week there has been quite a few bluefish caught on almost everything you toss out. Those I saw last week were in the 2 to 3-pound range. Several people got their limit on them. 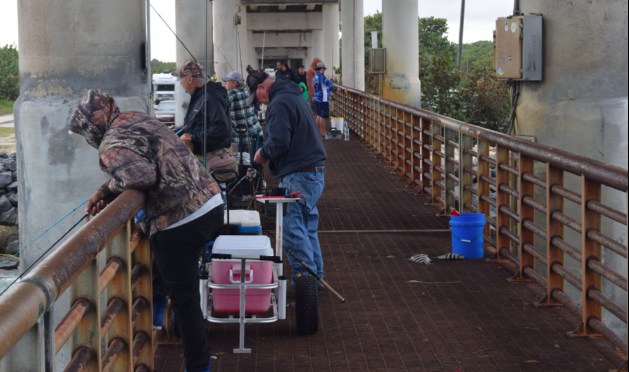 Catwalks: The  North side is still closed except for a tiny section, but sheepshead are being caught behind the bridge pilings on live fiddler crabs. Cut shrimp will work, too, but the pesky blennies will be all over the shrimp. The south catwalk fishing is much better. I saw flounder caught last week on live finger mullet - incoming tide is the best for them. The sheepshead bite has been rather good fishing the incoming tide behind the pilings on live fiddlers. Most of the fish caught are around 13 to 15 inches, really nice fish. Along the shoreline, west of the catwalk on this side, they are catching small snook, black drum and flounder. The flounder on mud minnows and finger mullet, the snook and drum on live shrimp.

T-Dock: Here the fishing has been a little slower, but they are still catching a mixed bag of species. Spanish mackerel are there one day and gone the next. Small flounder are being caught on different baits, cut bait, greenies, mud minnows and finger mullet. Also, last weekend I saw  nice keeper mangrove snappers caught around the dock pilings, mostly on cut baits. Jack crevalles and some bluefish are around as well to keep it interesting.