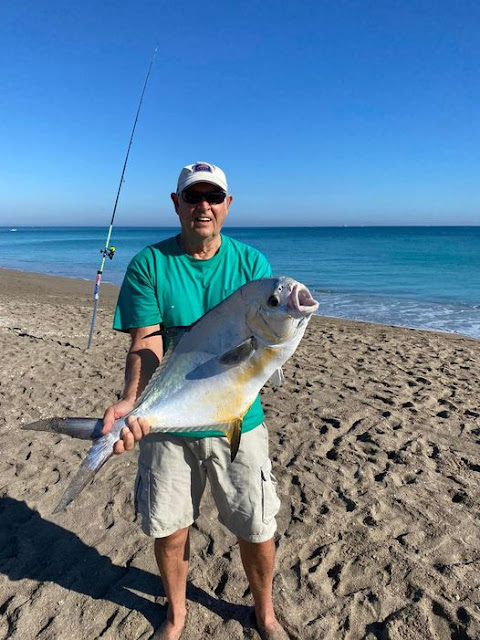 It’s New Year Eve and I want to wish everyone a Happy, Safe, and Healthy New Year . If anyone has fished some of the beaches on the north end of Hutchinson Island in the past few days then you have probably put some pompano in your freezer . I had the opportunity to fish for a few hours yesterday afternoon and was lucky enough to put 4 big pompano in my cooler . Electric Chicken and EZ Flea Fishbites were the baits that produced. If you target any of the northern beach accesses from Middle Cove to Fort Pierce Inlet , remember most of those beaches are relatively deep as compared to the ones to the south . I always fish at least one rod relatively short, from 50 to 60 yards because of the deeper water, even at low tide . Three of the four nice pompano were all caught on that short rod . Today I fished with longtime friends , John Daly and Chuck Frith , and we managed to put 8 nice pompano in the cooler and Chuck caught and released a beautiful permit to go along with our pompano. Green Crab Fishbites was the bait that fooled the permit and Chuck ended up 100 yards down the beach from where the initial bite occurred. It looks like we are going to see a weather and wind change as we head into 2022 and conditions are forecast to be a little challenging in the beginning of the week. I hope everyone enjoys the remainder of the New Years Weekend and again, Happy New Year .