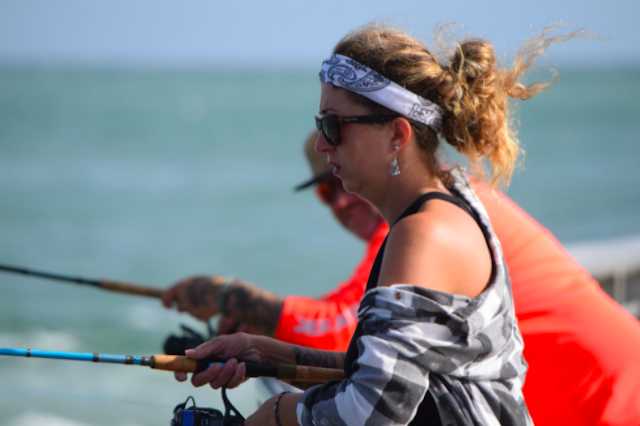 Our fishing guide, “Snookman” Wayne Landry, reports that fishing has picked up slightly at the North Jetty now that the water has calmed down, but it is still a bit dirty.

“The water temps along the coast are at 68 degrees in our area,” he says. “This has invited some of our cold-water species to pick up the bite! The talk of the jetty and that I have seen is the black drum showing up. Most of them are small, around 2 to 4 pounds, a nice size for eating, and they eat well. Minimum size on these are 14 inches total length and a max of 24 inches with a bag limit of 5 per person per day. The other species I saw was the sheepshead. Most of them were in the 12 to 14-inch range with a minimum size limit of 12 inches, fork length, and a daily bag limit of 8 per person per day. These are being caught on live and dead shrimp. Sand fleas and fiddler crabs work too if you can get them.”

The finger mullet have mostly gone, Wayne adds, (but there are still some around inside the inlet) and that has led to the mackerel bite slowing.  Mackerel can still be caught, but he cautions that they are small, between 14 and 18 inches. There are a few bigger ones around – along with bluefish – but not many.

“The snook bite over here has slowed down due to the colder water and the boaters are still getting oversized ones farther out from the jetty,” Snookman says. “Some are being caught on the jetty, but very few and they are smaller ones. Big reds and jacks are being caught by boaters drifting the inlet with live baits on both tides.”

Smaller snook are being caught on the South Jetty along the rocks to the catwalk. One of Wayne’s lady angler friends got a slot fish and saw several other slots as well, most being smaller non-keepers. The bait of choice is live finger mullet and paddle-tail swim baits fished slow. Other species over here have been bluefish, some smaller mackerels and whiting. Big jacks and large redfish are possible as this side was loaded with lots of black mullet. she told Wayne.

At the T-dock, Wayne says the fishing is slow unless you know the good spots.

“Spanish mackerel, bluefish and jacks are present but they are a good cast out away from the pier with spoons and jigs,” he says. “The other chatter I am hearing is about flounder. Cooler temperatures are drawing flounder in, but those that are caught must be returned because the season is closed for them until Dec 1st. Live finger mullet or mud minnows is best for them. Slot limits on flounder are 14 inches total length and a daily bag limit of 5 per person per day.”

“With the surf calming down and the water cleaning up some, expect to see whiting, drum, bluefish, mackerel and possibly some pompano to show up, and even a flounder is possible on small live baits, both sides of the inlet,” Wayne says. “The mackerel can be caught on spoons and jigs, and the others on dead and live shrimp.”

Wayne’s recommendation: “The weather is supposed to be mild all week and pretty calm windwise, so go get some bait or your favorite artificials, find a good spot to hang out, wet a line and enjoy the outdoors at the ocean. This time of year, you never know what is going to turn up on your hook.”