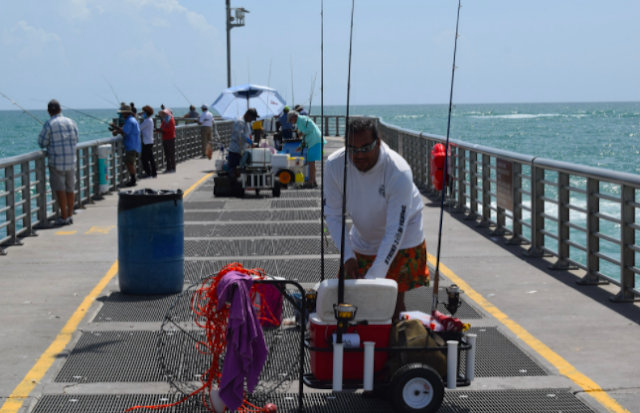 A bit slow, but look for one fish, two fish, redfish, bluefish

Look for sunny skies and a high of 76 degrees, east-northeast winds of a gentle 6 mph, and one to two-foot swells.

“Fishing is slow at the North jetty, but there are still plenty of small to medium-sized bluefish being caught on the outgoing tides at the end of the jetty on spoons and cut bait being tossed out in the channel area,” he says. “Also, some big redfish are being caught on the cut bait too- both sides and tides- but the fish are too big to keep.”

Jack crevalles are present, too, he adds.

“On the ocean side of the jetty there are still some black drum being caught on live and dead shrimp, along with a few sheepshead,” Wayne says. “The drum I saw caught were anywhere from 15 to 25 pounds, but most are smaller around the 15 to 20-inch size. Another species being caught is the Spanish mackerel, but they are small. Small white crappie jigs, spoons and diamond jigs are getting them to bite.”

The inlet is brimming with large black/roe mullet that can be caught by cast net. A wonderful fish to fry or smoke, the fish are so plentiful that folks are snagging them with small jigs fishing for pompano  Flounder fishing is slow, with only a few being caught - most are still small, between 14 and6 inches.

Bluefish and jacks are hitting at the end of the South jetty on the outgoing tide with silver spoons.

The water has cleaned up and the pompano bite is going again in the surf area just south of the jetty,” Wayne says. “Sand fleas and cut shrimp will entice them. There also are still small snook being caught on the incoming tides along the wall with live baits. Again, many large lack mullet are here as well. The flounder bite on this side has picked up quite a bit, with many of the fish being caught between 16 and18 inches. Many small ones are being caught, but they have ‘grown up’ a bit. I talked to a few guys who have caught 15 fish in the last couple days, both tides. Bait of choice for them: mud minnows.”

At the T-dock, anglers are throwing jigs and silver spoons to catch bluefish and jacks. “A few flounder are also back here as well along the shoreline on both sides of the dock area,” Wayne adds. “Use mud minnows and finger mullet, preferably the smaller ones.”

Along the surf, catfish and stingrays are abundant, Wayne says, but if you can find clean and deeper water, the possibility of catching small black drum, pompano, and whiting are there. Sand fleas and cut shrimp are the bait of choice.

“On a side note, the freshly-painted yellow lines painted on the North jetty designate a safe walkway for people walking the jetty,” Wayne says. “Only anglers and their poles are supposed to be in the area between the line and the railing. Carts, coolers, chairs and fishing accessories should remain only in the center of the jetty/yellow lines. These  lines were installed by the park service for everyone's safety and to create a clear pathway in the case of a medical emergency. A stretcher will not roll on the grates.”

Case in point: A woman recently tripped on coolers and tackle bags while fighting a fish, splitting her head open, Wayne says.

“Enjoy these  balmy Florida winter days and catch some fish,” Wayne says. “Also, keep a camera ready for capturing the unexpected. Last week, I saw a huge hammerhead shark, a seasonal resident this time of year. It is about 12 to 14- feet long, but I didn't have my camera, so go getcha some. Happy New Year and tight lines, everyone."