The snook bite remains good in the St. Lucie River, especially around the dock lights at night. Though many have moved farther up into the river, there are still some being caught around the Jensen and Stuart Causeways as well as up around the power plant. Though live baits are still getting hits, because of the cooler water, live shrimp, which offer a slower presentation, are working slightly better. 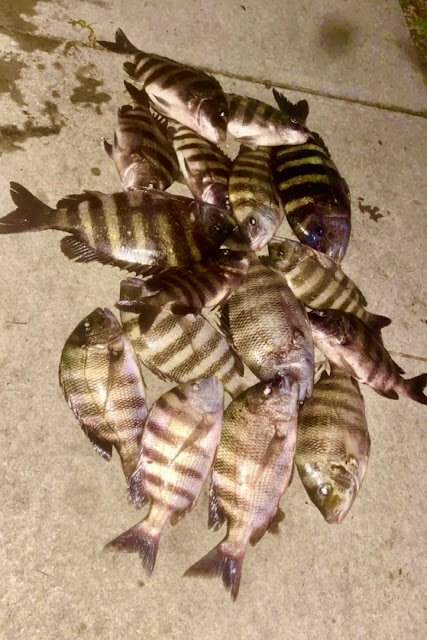 Also in the St. Lucie River, sheepshead are being caught around structure using either live shrimp on a jig or fiddler crabs.

Black drum are being caught around the bridges.

On the beaches of St. Lucie and Martin Counties, the pompano action is still good. Again, it's for the long rods as most of the fish are being caught 70 to 110 yards from shore. Fishbites in yellow crab and E-Z flea flavors are working best.

Though the Peck's Lake area in Stuart is loaded with Spanish mackerel right now, it's not the only game around. Anglers are finding good numbers of them from the Lake Worth Inlet north through Jupiter. They are being caught trolling spoons in 20 to 30 feet of water and are congregating along the bait rocks. They are also being found by watching for color changes, birds and schools of minnows. Remember to use a trolling spoon (not a casting spoon) like a Clarkspoon or a drone spoon small enough for Spanish mackerel.

When you do catch a few of those tasty Spanish mackerel remember to get them on ice, with a bit of salt water mixed in, immediately to preserve them. Also, remember, unless you're going to smoke them, they are best eaten the day they are caught so only take what you need.

Finally, this time of year, it pays to have your gear set up and ready as in addition to Spanish mackerel, there are plenty of other species cruising down the coast including bluefish, ladyfish, jack crevalle and even cobia along the beach.

At the Boynton Inlet, anglers working the south jetty are reporting catching some impressive flounder. Up to five pounds, they are hitting live shrimp on a half-ounce jig head during slack tide.

In the Intracoastal Waterway, there has been a plethora of different species to target. Pompano, bluefish, Spanish mackerel, sand perch, sheepshead, jack crevalle and snook are being caught from the Boynton area to the Flagler Bridge.

For the bluefish, Spanish mackerel and jack crevalle, trolling spoons or yellow feathers are working.

Live shrimp, sand fleas or clams have been producing strong responses from the sand perch, sheepshead and pompano around the bridges, docks, seawalls and area flats.

The snook are hitting live mullet, live sand perch, greenies or shrimp fished around bridges at night and during the early morning hours.

The bass bite has been slow on the lake the past week. They are mostly being caught by anglers working the outside grassline at first light using wild shiners. For artificial, Senkos in blue or black have been producing some action.

The spec bite has been a bit hit or miss the past few days. One day anglers are getting 30, the next five. It has been best at first light and right at dark. Minnows are working best in the river and jigs in the grassy areas in the lake.