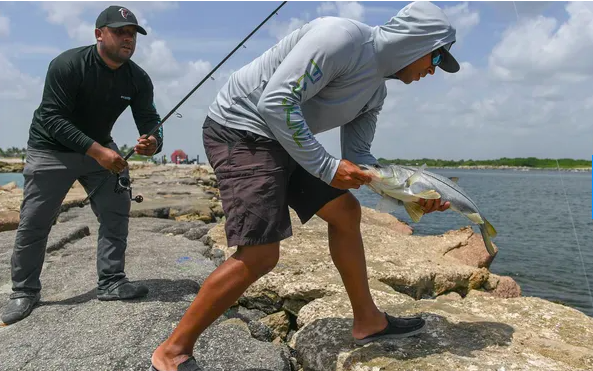 Snook, that is. Twice a year — for three months in the summer and for six weeks in the winter — snook are afforded protection from being invited home (unwillingly) for dinner. The winter closure is necessary because snook are a tropical fish species susceptible to cold weather and low water temperatures. When the water gets too cool, snook get sluggish. When it gets into the 60s, snook will stop feeding altogether. If the water temperature gets into the 50s, it can actually kill snook.

It's been awhile since we saw that, but when we did, it was catastrophic. It was January 2010 and temperatures across Florida remained below 50 degrees for 10 consecutive days. Snook seemingly froze. Suddenly, from Titusville to Flamingo, including the Keys, snook which couldn't escape to deeper, warmer water began floating up dead. It created a moratorium on harvest for the next year and longer in half of Florida. It's been awhile since we had a good old fashioned hard freeze. Sometimes that can be a good thing.

This winter is scheduled to be a La Niña winter. That means warmer and drier than normal. I doubt any snook will freeze to death this year.

For complete fishing regulations in Florida go to MyFWC.com.

Inshore: Big redfish are feeding on crabs during the outgoing tides and can be caught on crabs or live croaker. Snook are staged on the reef around the jetty in Sebastian Inlet, and are also being caught around the bridges in Vero Beach and on mangrove points south of town.

Freshwater: Bass fishing is steady at Stick Marsh and Headwaters Lake on lipless crank baits, spinnerbaits and wild shiners. Anglers fishing for specks are finding a slow bite in the canals and near the culvert pipes using minnows and small jigs.

Surf: Anglers are doing their due diligence for pompano and whiting. Calm shorebreak early in the week enabled a few to get caught at Hutchinson Island beaches. It may not be great conditions the next few days to surf fish for pomps.