Wherever you may fish, live bait is always the best lure. To save time and money, you need to keep live bait ready. Cast netting is the most economic tool for catching your own bait. You can also use a cast net to catch shrimp, larger fish, mullet, etc.

Cast nets have been used for thousands of years. A good example of cast netting in antiquity is after His resurrection, Jesus tells his disciples to "'Throw your net on the right side of the boat and you will find some.' When they did, they were unable to haul the net in because of the large number of fish." (John 21:6 NIV).

Cast netting is very popular, either in fresh or salt water, and can be used in different applications from Sport to Commercial fishing. Many people use cast nets, from kids to experienced professional fishermen, almost everywhere in the world.

Throwing the net creates a driving force that causes the lead line to open the net to a flat form, the lead weights then sink the net. After the net has sunk, and the brail line is pulled, the lead line is forced to close thus creating a pouch in the net which holds the catch, trapping a school of shrimp or fish. After pulling the net from the water, opening the leadline will cause the catch to fall out.

Depending on what kind of catch is targeted, i.e. shrimp, pin fish, shiner, mullet, sardine, etc., the correct size of mesh and net will provide more accurate hauls. As with any fishing equipment, the bigger the targeted catch, the bigger size of mesh and stronger netting material needed. 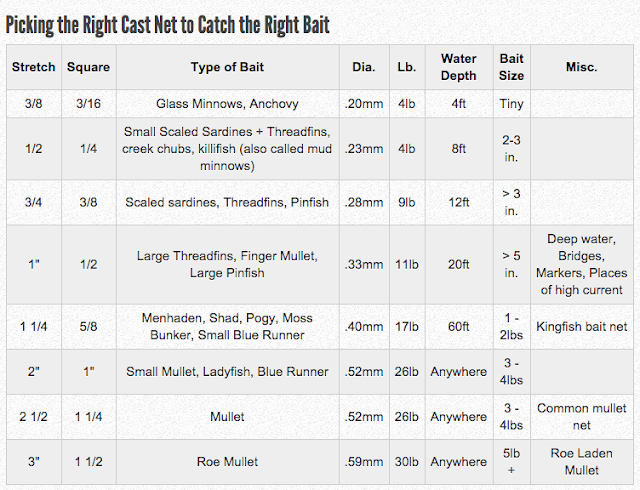 Cast Net Care
The most important thing in cast net care is rinsing your net after every use. Washing the net not only washes away the salt water, it also removes fish particles and slime remaining on the net. The fish slime is particularly harmful in deteriorating the net. Simply rinse well with a garden hose and allow the net to dry. Then place the net into a bucket or any other dry storage area.
Sunlight is another harmful element to the cast net. Do not allow your cast net to stay in the sunlight for long periods of time. This is especially important for monfilament cast nets. Overexposure to sunlight will cause the netting to become brittle and weak.
Another secret in cast-net care is fabric softener. By using fabric softner you can prevent the net from becoming stiff and help in the overall spread of the net. Just take a pail of water, add a cup of softener, and place the cast net in the pail for about one hour. Remove the net, rinse, and store the net after it dries. This process should be done when the net is first purchased and repeated every six to eight months.
Finally, just inspect your net occasionally, checking for any holes or weak areas. You, or your local net shop can repair these areas. If repairing the net yourself, "How to Make and Mend Cast Nets" by Ted Dahlem can be a helpful tool.