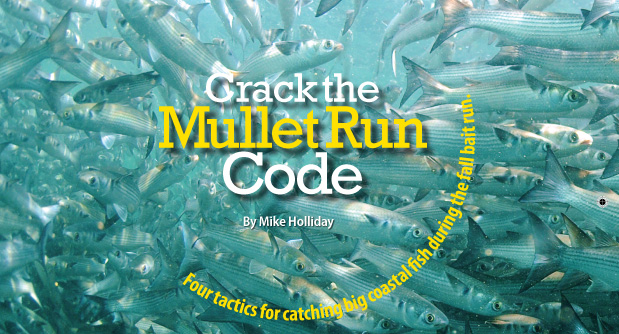 Using my trolling motor to position the boat a long cast from the seawall, I stood ready to send a topwater plug deep into a basin created by two parallel seawalls roughly 80 feet apart. The tips of the walls stuck out 30 feet or so from shore, blocking the path of the mullet schools migrating along the shoreline. 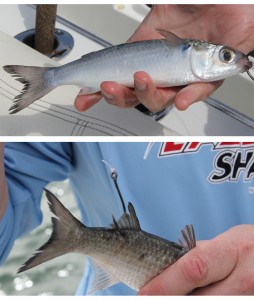 Placement Matters
For deepwater areas around bridges, or around seawalls where you want the bait to push away from the boat and up against the wall, the best place for a hook is in front of the dorsal fin. To get the bait to swim deep, you can also hook it in the throat, a great technique when fishing directly above the bait on a bridge; the mullet swims down against the pull of the line.
Fishing from land toward open water, hook the underside of the bait behind the anal fin, to force the bait to swim away while remaining on the surface. Similarly, when fishing toward a seawall, you can hook mullet beneath the second dorsal fin (left, bottom) to drive them toward the structure.
Around docks, hook through both lips (left, top) to let the bait swim around a piling, but pull the baitfish out of the structure should it get too deep. This is also the best hook placement for slow-trolling.
About the Fall Mullet Run
Peaking some time in October, Florida’s east coast mullet run is a sight to behold. At beaches and inlets from Fernandina to Miami, when the mullet arrive, you can expect to see thick, dark waves of baitfish fleeing tarpon, sharks, bluefish and all manner of coastal predators.
On the Gulf Coast, bursts of similar activity kick off this month, as well.
The east coast run is composed primarily of silver mullet in the 4- to 5-inch range. These “finger mullet” are fish not yet one year old, spawned in the March-through-June time period. In spring and early summer, the larval silver mullet are carried north by the Gulf Stream, and then move inshore to feed in estuaries as far north as North Carolina. The species is intolerant of water below about 68 degrees Fahrenheit; as winter approaches, the fish head south for warmer water. (Only juvenile silvers— young of the year—were documented in a North Carolina report, for example; few, if any, adults.)
Another mullet “run” of sorts may intersect that of the silvers: Striped mullet, mature at 8 to 11 inches, move seaward in the fall, exiting rivers, canals and intracoastal waters. They will spawn offshore in October through December, and then return to their home waters. This pattern sees big schools of mullet gathering in lower estuaries of both Atlantic and Gulf Coast. Striped mullet are more tolerant of cold water than the silvers; thus populations reside year-round in northern estuaries.
Members of both species require some level of salinity in very early stages, hence the “catadromous” spawning activity—living in fresh waters, spawning in salt, the inverse of salmons and other anadromous fishes. Once striped mullet reach about 1 inch, they can live in completely fresh water; we were unable to find a specific reference to salinity threshold for silver mullet, but one report indicates the species is less tolerant of low-salinity waters.
Mullet are primarily herbivores, grazing on algae and tiny plants.
A simple way to tell silver mullet from striped mullet: the silver has a black edge on the tail fin.
Pause For The Cause
Any time you’re fishing topwaters at night, you want to walk the dog through the lights and structure, with the exception of fishing bridges with distinct shadow lines. I’ve found that walking a topwater from the dark and into the light in one continuous motion isn’t as effective as pausing the bait when it first contacts the light. What I like to do is work the bait continuously in the dark areas, and then pause the lure when it hits the light, allowing the wind and current to push the bait through the light.
If you watch a single mullet moving through a bridge, the baitfish will zig and zag their way through the dark, but when they hit the light, they freeze. It’s as if the light blinds or confuses the baitfish, as they drift through the lighted area with the tide. Quite often, that’s when the snook and tarpon attack.
So when working a topwater, stop the lure in the light and let it drift through the light, bouncing up and down with the wave action. This technique doesn’t always work better than a steady retrieve, but there are a lot of nights when it’ll outfish a steady retrieve three to one.
Lastly, you want to match the size of your topwater lure to the size of the mullet moving through the light. Color isn’t as important as the size of the silhouette of the lure as it drifts through with the tide.
Courtesy of Capt. Mike Holliday/Florida Sportsman Mag.